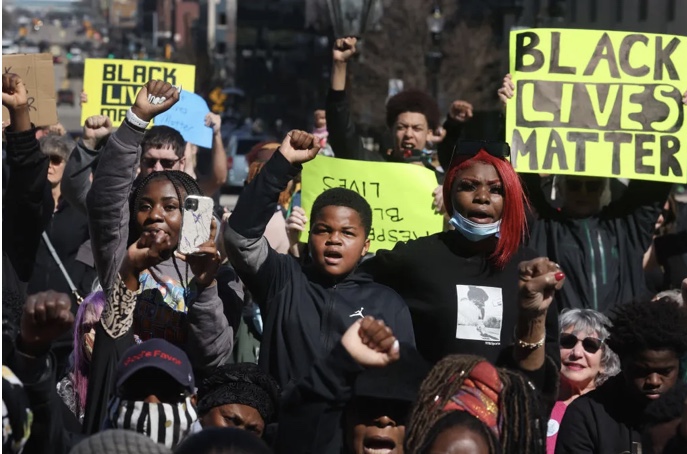 A viral video resurfaced of 13-year-old Naira Tamminga, speaking in front of the Grand Rapids city commission board. Watch the speech inside.

A viral video resurfaced from last month of 13-year-old Naira Tamminga, speaking in front of the Grand Rapids, Michigan city commission board. Tamminga’s speech was rooted in the tragic death of Patrick Lyoya, which sparked thought-provoking conversation online.

Lyoya was a 26 year old Black man, who was fatally shot in the back of his head by Officer Christopher Schurr during a routine traffic stop on April 4. Lyoya and his family moved from the Republic of the Congo and at the time of his death, his father shared, through an interpreter, that their family moved to America to escape violence in their country.

Writer and social commentator, Shaun King, shared Tamminga’s speech to his personal social media page. The video has now garnered over 2 million views since he shared it on  Friday, July  15.

Tamminga stood before the city commission board and voices her stance on the recent killings of Black children across the country and how it directly affects her generation. She says, “I don’t trust any of you. I don’t trust any of the police officers because you have shown time and time again that we cannot trust you.”

Tamminga is joined by a group of her friends, who are recording and nodding alongside her.

“I go to City High Middle School. Just voted the top high school. Top high school in the state,” she says. “You know what they teach us? Teach us to speak up for yourself. We’re IB learners, right? We’re smart. None of you are smart?” she asks.

Tamminga begins to direct her conversation to officers and the law.

“None of you can recognize murderers? You can identify that there is a problem, but you cannot fix it. I don’t know much about the law. Again, I’m young, but I’m pretty sure an accomplice to a murder should be arrested. And right now, all of you sitting and doing nothing are accomplices to a murder.”

Her speech continues for two-minutes, discussing how life is for a young Black person in America.

“I’m expected to go outside and walk my 5-year-old little brother. God forbid we look too scary,” Tamminga expresses. “God forbid he accidentally is wearing his hood, and we get the police called on us.”

The Greater Grand Rapids NAACP has since demanded a federal investigation into the policing culture at the Grand Rapids Police Department following the death of Lyoya.

This is 13-year old Naira Tamminga at a meeting with City Officials after Grand Rapids Police in Michigan murdered Patrick Lyoya, a 26-year-old refugee from the Democratic Republic of the Congo.

LISTEN TO EVERY WORD.
pic.twitter.com/p1c2iNizHG

Grandma, 61, And Husband, 24, Are Expecting First Child Together