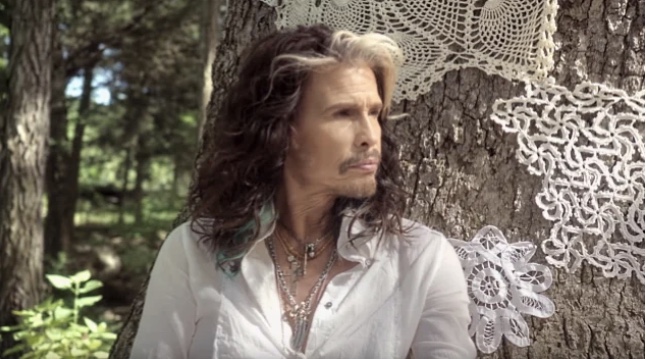 According to TMZ, AEROSMITH frontman Steven Tyler is doing “amazingly well” after his latest rehab stint.

A little over a month ago, AEROSMITHannounced that Tyler had entered a treatment program following a recent relapse, prompting the band to put their Las Vegas residency on a temporary hold.

Sources close to Steven have now told TMZ that he checked out of a facility earlier this week, and actually stayed longer than the 30 days he was originally supposed to. The tabloid site reports that the singer is “totally clean and sober, and looks good physically too — he’s at a healthy weight and his skin looks great.”
When AEROSMITH announced Tyler‘s return to rehab in late May, the band said in a statement that the 74-year-old underwent foot surgery in preparation for the group’s return to the stage, and in managing his pain, suffered a relapse.

“As many of you know, our beloved brother Steven has worked on his sobriety for many years,” the statement, which was shared on Instagram, read. “After foot surgery to prepare for the stage and the necessity of pain management during the process, he has recently relapsed and voluntarily entered a treatment program to concentrate on his health and recovery.”

AEROSMITH said at the time it was canceling the June and July dates of the “Deuces Are Wild” residency, which was slated to begin at Dolby Live at Park MGM on June 17.

Three years ago, Tyler — whose vast consumption of cocaine, heroin and alcohol in the 1970s earned him and bandmate Joe Perry the nickname “The Toxic Twins” — said that he had a lot of fun drinking and using drugs.

“You have a shot of Jack Daniel’s and you play Madison Square Garden and you get offstage and you go clubbing with Jimmy Page — come on!” the 74-year-old said. “After two encores in Madison Square Garden, you don’t go and play shuffleboard. Or Yahtzee, you know? You go and rock the fuck out. You’ve done something that you never thought you could, and you actually think that you are a super-being.”

Tyler, who once said he “snorted half of Peru” (meaning cocaine, of course),said that his drug use got to a point where nothing mattered more.

“We would do cocaine to go up, quaaludes to come down,” he said. “We would drink and then snort some coke until we thought we were straight. But that’s not true — you’re just drunk and coked out. It was more or less the thing to do, back then as well.”

“I don’t think there were any bands that even knew what sober was,” he added.

“I was the kind of guy who would hate to be the guy who never came down because he never went up, if you can understand that. So I played with everything.”

Tyler said that his drug use enhanced his performance at first but eventually took its toll. Over time, he noticed that he required more alcohol or drugs to get the same relief.

“It absolutely works for a while,” he said. “But then things go wrong. You become addicted, it’s something you do all the time, and suddenly it starts influencing your greatness. What happens with using is: It works in the beginning, but it doesn’t work in the end. It takes you down. There’s nothing but jail, insanity or death.”

Asked if he missed anything about how he used to be, Tyler said: “I got a band that’s still together, the guys are still alive, everyone’s healthy. We play better than we did 50 years ago. I mean, there was a certain rawness when we played clubs and we were all fucked up. Sure, I get it. But the band is still together and still sought-after. People still want us for a million-plus dollars a night. And that’s what’s at risk if I use again. And my kids. My cats. My dogs. My beautiful fucking house in Maui. My girlfriend. Everything is at risk.”

Aerosmith frontman Steven Tyler is out of rehab, after a successful stay, and those around him are excited about the progress he's made in a lifelong battle. https://t.co/AbT9W62c9M

Related Topics:EntertainmentSteven Tyler
Up Next