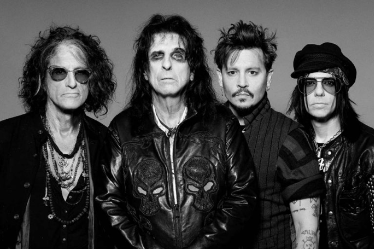 Crossbone Skully is the multi-dimensional brainchild of Alice Cooper and Hollywood Vampires member Tommy Henriksen which has debuted its lead single, with an animated short on the way.

What you need to know:

The fans Fans will get their first look at Tommy Henriksen’s carefully crafted character: Crossbone Skully, and the character’s world, which inspired its own upcoming graphic novel, ‘Thing #1’.

Crossbone Skully is an “avenging superhero”, beginning his journey to rescue humanity on ‘Evil World Machine’. Legendary producer Mutt Lange (AC/DC, Def Leppard), emerged from retirement to serve as executive producer on the album which was written by Tommy Henriksen and Tommy Denander, the song talks about the evil currency of the world.

Tommy Henriksen (Alice Cooper/Hollywood Vampires) serves as lead vocalist and bassist on the album, with additional voice overs on ‘Thing #1’ by Hollywood A-lister Johnny Depp (The Evil Sorcerer), and an impressive list of rock royalty including Alice Cooper (The Bringer of Light), Joe Perry (The Big Bad Bone Crusher), Nikki Sixx (The Crooked Crow), Kane Roberts (The Alpha Watchman), to name a few in the short, animated film.

“This has been an amazing journey,” says Henriksen, who began the project with Denander almost four years ago. “If you had told me back then that I’d be working with the greatest producer who ever lived, I wouldn’t have believed it.”

Crossbone Skully will be engaging fans with more music from the album, which delivers a “powerful message in today’s global climate, inviting people of all backgrounds to coexist and break down oppressive barriers”.

Additionally, Tommy Henriksen’s vision for Crossbone Skully will continue to unfold, culminating in the release of the band’s debut album in 2023.

Why is Johnny Depp in the Savage x Fenty Fashion Show?

Christian Bale Didn’t Want To Talk To Johnny Depp Until… On ‘Public Enemies’, He Once Said “I Enjoy It That Way”