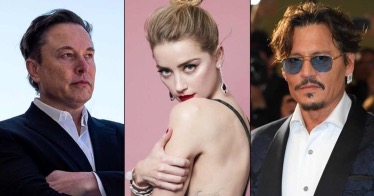 While testifying about Amber Heard and Johnny Depp‘s relationship, Christian Carinorecalled his former client confiding in him about her ex-husband amid her split from Elon Musk.
Carino, 53, who previously represented Depp, 58, and Heard, 36, claimed that the actress told him she was “just filling space” by dating Musk, 50. During the pre-recorded deposition that was played on Wednesday, April 27, the talent agent said he asked why Heard was upset by her breakup with the Tesla CEO if she wasn’t “in love with him” after Depp’s lawyers read their text exchanges.

“I hate that yet again a man lets me fall on the spikes by myself,” a text from the Aquamanactress to Carino read. “Meaning, they are mad at me for leaving them and put things like this out there.”
In response, the CAA agent wrote, “You could avoid all this if you stopped dating über-famous people. You can be with a big man who isn’t famous.” There were also messages from 2017, in which Heard requested for letters to be delivered to Depp.

“I don’t know how or where to start. There’s no way to begin,” she texted Carino, who also claimed that he was told by Heard that she missed her ex-husband. “Finally I am single, clear in my heart and mind. I just want him to know I love him and that I am sorry.”

Heard and Depp were first linked in 2011 after meeting on the set of The Rum Diary. After three years of dating, the duo tied the knot with two wedding ceremonies. The activist filed for divorce one year later and obtained a temporary restraining order against Depp after accusing him of domestic violence. Depp, for his part, has denied the claims.

Amid her divorce from Depp, Heard sparked romance speculation with Musk. After one year of dating, the pair called it quits in August 2017. At the time, the businessman opened up about his feelings for Heard.
“I was really in love, and it hurt bad. Well, she broke up with me more than I broke up with her,” the South Africa native told Rolling Stone in November 2017, noting that he was in “severe emotional pain” since the breakup. “I’m looking for a long-term relationship. I’m not looking for a one-night stand. I’m looking for a serious companion or soulmate, that kind of thing. I will never be happy without having someone.”

After five months apart, Heard and Musk briefly rekindled their romance before calling it quits for good. “Amber wants her independence and prefers being friends rather than romantically linked,” a source exclusively told Us Weekly in February 2018, with another insider adding, “Elon decided it was time to end things, and Amber agreed. They both care for one another, but the timing just isn’t right.”

The Pineapple Express star later reflected on her connection with Musk, telling The Hollywood Reporter in December 2018, “Elon and I had a beautiful relationship, and we have a beautiful friendship now, one that was based on our core values. Intellectual curiosity, ideas and conversation, a shared love for science. We just bonded on a lot of things that speak to who I am on the inside. I have so much respect for him.”

Following their 2016 divorce, Heard and Depp continued to be involved in lengthy court battles. The Oscar nominee sued his ex-wife for defamation after the Texas native penned a 2018 op-ed about her past history with abuse for The Washington Post.
Depp argued that the article affected his career in Hollywood — even though it didn’t mention him by name. The Pirates of the Caribbean star also previously filed a libel lawsuit against the U.K. newspaper The Sun for referring to him as a “wife beater” in a 2018 article. Two years later, the High Court of Justice ruled that The Sun‘s article was not libelous because Heard’s allegations were “substantially true.”

‘For all your support, thank you’: Johnny Depp Promises He Will Use His Star Power To Help as Many Fellow Abuse Victims as He Can, Says He Only Stands For the Truth Now