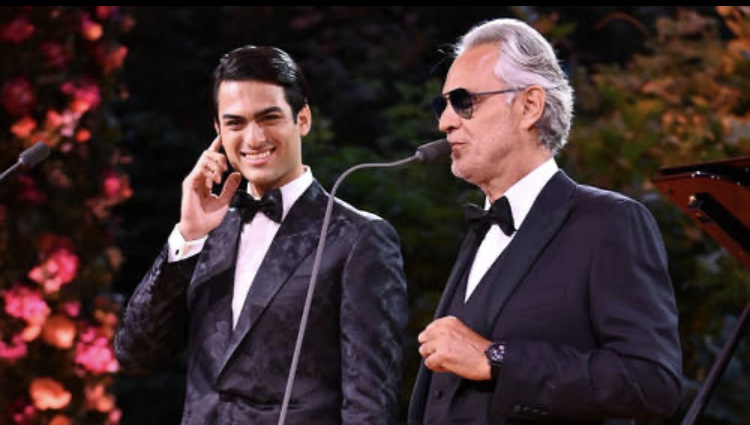 Andrea Bocelli steps in as last-minute understudy for his stranded son. Picture: Getty

‘I’ve been practising in the car!’, the senior Bocelli told an unsuspecting audience, who had been expecting to watch his son perform.

An Italian audience expecting to enjoy a performance from Italian singer Matteo Bocelliappeared speechless, as his father – the great tenor Andrea Bocelli – stepped on stage as a last-minute understudy.

“Normally in life it’s the sons who replace the fathers. In this case it’s up to me, I have to replace my son,” Bocelli told the audience, according to The Times.

Matteo, 24, had been booked to sing at a concert in Marina di Pietrasanta, a town in Tuscany, but was stranded in Germany and unable to reach his home country.

As reported in The Times, his father Andrea continued: “I’m sorry for all those of the fair sex who were expecting Matteo, who is young and handsome, but I will have to sing what he was due to sing, and which I have been practising in the car on the way over here!”

The beloved tenor played the piano and sang two songs – ‘Ci vorrebbe il mare’ (We need the sea) and his signature song Con te partirò, also known by its English title ‘Time to Say Goodbye’. His performance was met with a standing ovation.

The concert took place in honour of the late Italian music producer and composer, Giancarlo Bigazzi, best known for composing the score to Oscar-winning film Mediterraneo(1991).

Matteo Bocelli’s singing career was launched in 2018, when he appeared on his father’s album Sìin the best-selling duet ‘Fall on Me’. The father-son duo went on to perform at the Royal Variety Performance that year, for the Duke and Duchess of Sussex.

Comparing his son’s voice with his own, the senior Bocelli said: “Technically they are very different, but there is one thing that makes them most similar: the attitude. That characteristic way of expressing yourself through your voice.

Kevin Costner Salary: How Much Is The Yellowstone Star Paid?