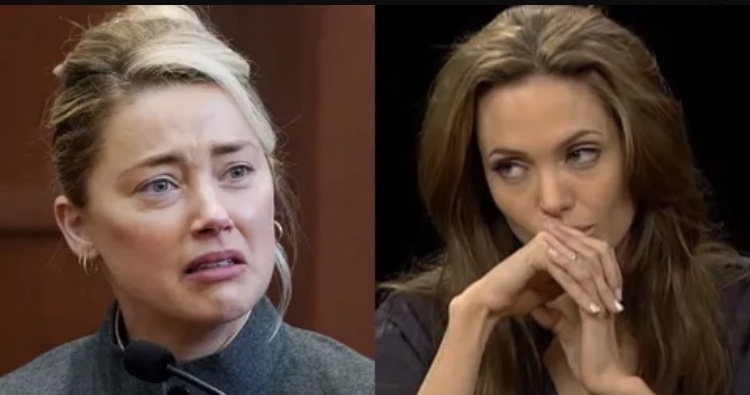 The pair worked together in the 2010’s The Tourist.

Amber Heard and Johnny Depp first met in 2009 while shooting the movie The Rum Diary. The pair were cast as each other’s love interests in the film adaptation of the Hunter S. Thompson novel. They finally started dating in 2012, after Depp broke up with his long-time partner and mother of his children Vanessa Paradis.

The Rum Diary feature Depp saving Amber Heard from a possessive boyfriend. Now we find he was MISCAST #ImWithAmber pic.twitter.com/EN8FBj8Dai

Back in 2014, National Enquirer reported that Angelina Jolie was not fond of Heard since the very beginning of her relationship with Depp. “Angelina Jolie is giving romance advice to old pal Johnny Depp warning him he may be making a big mistake marrying Amber Heard,” it read.

During the Depp vs Heard defamation trial, Heard claimed that her Pirates of the Caribbean star ex had affairs with many men in Hollywood. This also included Jolie’s ex-Billy Bob Thornton. Amber Heard clarified that she wasn’t sleeping with any of the men, including Angelina Jolie’s former husband.

Johnny Depp won, whether you like it or not.
‘The order is final’ #JohnnyDeppWon #AmberHeardlsALiar pic.twitter.com/CMx6hZ6HH2

Johnny Depp fans have taken to Twitter with the hashtag #JohnnyDeppWon after Amber Heard’s motion to have the verdict of her defamation trial against her ex-husband was denied. Amber Heard, 36, filed a motion earlier this month on the grounds that the verdict that she had defamed Johnny Depp, 59, was not supported by evidence. The Aquaman actress also alleged that a juror had not been properly vetted and questioned to be on the jury. But in new court documentsJudge Penny Azcarate denied all of Heard’s post-trial pleas on Wednesday.

In a 43-page memorandum, Heard’s lawyers argued that the verdict – and the $10million in damages she now owes Depp – should be tossed out. Her team argued that during the trial, Depp “proceeded solely on a defamation by implication theory, abandoning any claims that Ms. Heard’s statements were actually false.”

Amber Heard’s lawyers have previously stated that she is unable to pay the $10.35million in damages she owes Depp. The Pineapple Express star she has previously indicated that she wants to appeal the verdict, but to do so she would need to post bond of the full damages. Meanwhile, Depp’s lead attorney, Ben Chew, responded to the news that his Heard’s motions for a retrial have been dismissed. In a statement to Courthouse News, saying, “What we expected, just longer, no more substantive.”

One of Heard’s reasons for a retrial is based on the fact that a 77-year-old man was summoned for jury duty – but a 52-year-old man, who shared the same last name and address, was improperly seated for the six-week trial. Depp’s lawyers have asserted that the juror’s identity is irrelevant and would have caused no prejudice to the Aquaman actress.

The Pirates of the Caribbean actor’s attorneys said in a statement: “Ms. Heard’s desperate, after-the-fact demand for an investigation of Juror 15 based on a purported error in his birth date is…misplaced… Moreover, Ms. Heard’s argument is based on pure speculation.”

Depp sued his former partner over a 2018 article she wrote for the Washington Post about her experiences as a survivor of domestic abuse. The Edward Scissorhand star’s lawyers said falsely accused him of being an abuser. On June 1, the jury ruled in Depp’s favor. He was awarded $10 million in compensatory damages and $5 million in punitive damages.

Due to a Virginia statute capping punitive damages, Heard will only have to pay $10.35 million. The 36-year-old was simultaneously awarded $2 million in compensatory damages for her countersuit over comments Depp’s lawyer made about her.

5 New Grammy Rules And Regulations You Must Know