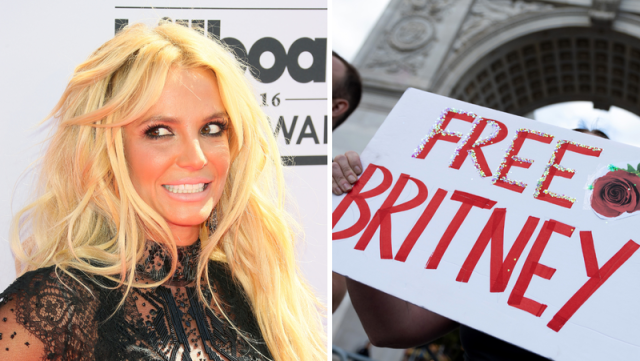 Britney Spears’ conservatorship was dissolved about one year ago, but concerns about the singer’s safety have recently escalated on social media following a slew of odd posts from the star. Of course, Spears has a persistent, charming history of off-the-wall social media posts—but what’s worrying her fans is that some of them of the newer ones seem recycled or edited, and she hasn’t been seen in public for some time. This has convinced TikTok conspiracy theorists that she’s secretly missing or unwell, and her husband Sam Asghari is covering this up by taking control of her social media accounts.

I want to be clear before taking you down this rabbit hole with me: There is little to no evidence of this. But it’s certainly notable how sincerely Spears’ fans seem to distrust Asghari—to the point that some viral videos claim Spears never even returned alive from the couple’s July honeymoon in Fiji, sparking the viral #WhereIsBritney hashtag.

Last week, on Tuesday, Spears appeared to briefly deactivate her Instagram account yet again, prompting Asghari to take to his own Instagram stories the following day to clear the air. “Social media can be traumatizing,” he wrote. “Sometimes it’s good to take a break.” Asghari continued, “She has her voice and is a free woman. I have respect for her privacy and I protect it at all times. Thank you to all of her protective fans.” In another post, he wrote, “Out of respect for her privacy I don’t post her 247. I ask for permission if I ever do.”

Not long before these posts, Asghari caught heat from Spears’ fans for appearing to post an Instagram Live without the singer’s consent. In November, when Asghari was Live on the app, he asked Spears if he could show her to his followers, to which, off-camera, she replied, “I have nothing to say. I don’t want to talk to them right now.” The incident drew backlash from Spears’ fans who said Asghari had violated her privacy.

But to some Spears fans on TikTok, the incident was a minor slip-up in a greater conspiracy against Spears. A number of videos shared shortly after Spears deactivated Instagram last week speculated that recent posts from her and Asghari actually feature a body double of Spears, insisting that the women pictured lack her characteristic features, like a mole on her face or the tattoo on her foot. Some said that a post appearing to show Spears at Nobu last week isn’t real and was edited to include her, citing the apparent messiness of her hair. One of the videos theorizing this was flooded with comments further pointing out that there were no paparazzi snaps of Spears at Nobu because the woman pictured was a body double, ostensibly with Spears’ face Photoshopped on top of the woman’s in photos posted online. “Sam really thought he slick,” one user commented.

The lack of pap pics of Spears lately is a recurring point for Spears fans. Other theory videos have singled out a post earlier this month in which Spears lavished some very unexpected praise upon her younger sister Jamie Lynn, whom Spears has long accused of being complicit in Spears’ conservatorship and abuse. As of Friday, when Spears posted a suggestive video of herself dancing to a Christmas song and eating cake on the floor, some said the video was old, as it has no relevance to the caption alluding to her recent 41st birthday.

Another theory is that Spears has never had control of her Instagram account even since her conservatorship lifted, and whoever doeshave control purposefully posts more unhinged content timed to new hearings or developments in her ongoing legal fightagainst her dad. One hearing took place place last Wednesday. Asghari, some of her fans posit, has essentially recreated the very conservatorship from which Spears struggled for years trying to get free.

“Celebrity is actually dead and uses a body double” is a pretty common internet conspiracy theory. See: right-wing websites during the time Hillary Clinton got pneumonia in 2016, the great Avril Lavigne replacement theory, or, my personal favorite, the Melania Trump body double theory.

look all im saying is that if melania trump really did have a body double this is exactly what I'd expect the news to say pic.twitter.com/oIwMF8Mqem

Nevertheless, I’ll never blame Britney fans for being afraid for her safety. Spears was in a conservatorship that controlled and surveilledevery aspect of her life for 13 years. And for a while, her father and others in the conservatorship did a pretty decent job making it look like everything was OK—even as, on the inside, Spears testified that she was being denied time with her children, forced into abusive rehabilitation centers, and required against her will to keep an IUD in, despite wanting more children.

The #FreeBritney crowd has been right about some things in the past, and Spears’ social media activities have been a bit out there lately. But I’m not convinced the singer is buried somewhere in Fiji and that Asghari is employing a rotation of body doubles to keep up pretenses. Spears deserves nothing but safety, freedom, and love after everything she’s had to endure, and to that end, I can’t imagine that a smattering of viral conspiracy theories about whether she’s even alive are particularly pleasant for her to watch.

Want to own a private island like Johnny Depp and George Clooney? Here’s what it takes to buy and maintain it