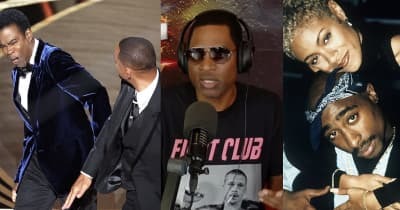 Four months after Will Smith shockingly slapped Chris Rock at the 2022 Academy Awards back in March, the incident is still a topic of discussion. Recently, Rock’s brother, Tony Rock, appeared on the Top Billin’ with Bill Bellamy podcast, which premiered on YouTube on Thursday (July 14), and shared his thoughts on the slap heard around the world.

When Bellamy asked Tony if he felt Will Smith was embarrassed by Chris’ joke about his wife, Jada, having Alopecia, he answered, “No.”

“He wasn’t embarrassed, everybody saw the footage, he laughed first,” the veteran comedian stated at the 10:24-mark in the video below. “So that’s not embarrassment, he was laughing.”

“In the time they cut to my brother and cut back, he [Will] was already up walking [to the stage],” he continued. “So maybe it was the Jada look.”

Tony also suggested that Will may have slapped his brother because the actor was always bothered by being labeled as “soft” and that his wife, Jada, keeps talking about her past friendship with Tupac.

“I think that [Oscar Slap] was the accumulation of him being slapped on other levels,” he explained. “He said it himself, he always hated the ‘soft moniker.’ He’s soft, Jada won’t let Tupac die, it’s always something about Tupac and his daughter [Willow Smith] brought up Tupac. And I’m not bringing up family stuff that people don’t know… this is stuff that everybody knows.”

“[Jada] commonly talks about Tupac, her [past] relationship with Tupac,” he added. “As a married man to this woman, you’re like, ‘Damn is what I’m doing not enough?

Tony also acknowledged that Will might have been mad at Chris’ previous jokes about him and his wife, which may have prompted the Hollywood superstar to assault his brother. But the stand-up comic felt that Will should have talked with Chris backstage about his offending joke.

Tony Rock’s comments aside, the Oscar Slap will forever be a sad moment in the history of the Academy Awards telecast.

Johnny Depp Finds Himself A New Lover ? Depp Spotted In Italy With Cute Red-Head In Tow

Fans of Prime Video’s The Lord of the Rings: The Rings of Power have reason to celebrate this week. Not only is season 2 of this epic series already under production, but according to The Hollywood Reporter a new character has also been announced for next season. Círdan, one of the oldest elves in Middle-earth, is set to join The Rings of Power’s ensemble.

While the role has not yet been cast for The Rings of Power, the Amazon series will not be this character’s first live-action appearance. In Peter Jackson’s The Lord of the Rings trilogy, Círdan is played by Michael Elsworth and appears briefly in the first and third films. In The Fellowship of the Ring, he can be seen as one of the three Elven ring-bearers during Galadriel’s (Cate Blanchett) opening speech. In Return of the King, you’ll spot him in the background when Frodo (Elijah Wood), Galadriel, Elrond (Hugo Weaving), Gandalf (Ian McKellan), and Bilbo (Ian Holm) board the ship at the Grey Havens.

Círdan may not have been a major character in the film trilogy, but he plays an important part in Middle-earth’s history and J.R.R. Tolkien‘s legendarium, including during the Second Age of Middle-earth during which The Rings of Power is set. At the end of the First Age, Círdan became a friend and ally to eventual Elven High King Gil-galad – the two fought together in the Great Battle against Morgoth and his evil forces.

During the Second Age, Círdan is one of the oldest and wisest Elves in Middle-earth. He helps the survivors of the war of the First Age form the Elven port city of Grey Havens and gives up his dream of sailing west to lend his gift of foresight to the Elves. Círdan received this gift from the Valar (god-like immortal beings) for his loyalty during the First Age, and it helps him provide guidance to the Elves as they rebuild and regain their strength post-war.

Later on in the Second Age, Círdan, like Galadriel, is hesitant to forge the rings of power, his foresight likely showing him hints of the rings’ future and Annatar/Sauron’s true intentions. But when Sauron’s plan is ultimately revealed, Círdan puts aside his hesitation to wield the Elven ring Narya – the ring of fire. Círdan also fights alongside Gil-galad once again as his lieutenant in the Last Alliance of Elves and Men. After Sauron is defeated in the Second Age, Círdan is one of the Elves, along with Elrond, who urges Isildur to throw the One Ring into Mount Doom. We all know how that went.

After losing his friend Gil-galad in the war against Sauron in the Second Age, Círdan retreats to Grey Havens, where he rules over the city through the Third and Fourth Ages. He eventually gives Narya to Gandalf and helps the Third Age ring bearers go west from Grey Havens after their journey to Mordor is complete.

In other words, including Círdan in The Rings of Power season 2 is a no-brainer for the series. There aren’t many Elves in Tolkien’s work that live for as long as he does, and his history in Tolkien’s work is very much intertwined with several of the stories being explored on the show. It’ll be particularly interesting to see how he’s integrated into The Rings of Power‘s main plot — the forging of the magical rings themselves — and what that all reveals about his relationship with Gil-galad.

There have been plenty of reports and rumors related to the Johnny Depp and Disney saga that has gone on for the last several months in the midst of Depp’s legal battles with Amber Heard.

During the trial, Johnny Depp shared that he wouldn’t go back and work for Disney even if he was “offered $30 million.” During the trial, Disney reportedly replaced Depp as the lead protagonist in the next installment of Pirates of the Caribbean with Margot Robbie, but that hasn’t stopped fans from holding out hope that the actor might reprise his role as Captain Jack Sparrow in the Pirates of the Caribbean franchise.

It was recently reported that Disney was considering making an animated series version of Pirates of the Caribbean that could include Captain Jack Sparrow without Depp in the role, but this has not been confirmed.

However, it’s clear that there is still some kind of relationship between the two entities, even as rocky as it has become.

As we head into the Halloween season, there have been some changes to the home screen of Disney+. The company is promoting its library of Halloween movies, including titles like Hocus Pocus 2, which just was released last week, as well as other classics like Hocus Pocus (1993), Muppets Haunted Mansion (2021), Halloweentown (1998), Tim Burton’s The Nightmare Before Christmas (1993), Maleficent (2014), and many others.

However, what you might be surprised to see is Edward Scissorhands (1990)– a film that has become synonymous with Johnny Depp as it was one of his first major starring roles– being promoted as one of the top Halloween movies on the streaming platform. It should be noted that the film is considered a classic by many, and despite the rocky relationship with Johnny Depp, Disney wants to promote its top content.

Still, the movie was produced by 20th Century Studios, so it is not even a Disney original, and it should at least be a little surprising that the film is one of the first options for Halloween-themed content on Disney+ considering the bountiful amount of films and shorts that Disney has in its own library to promote.

While this may seem insignificant, this does at least show that Disney hasn’t completely severed ties with Depp to the point that a return couldn’t happen in the future.

The two parties are still far from the negotiating table at this point, and most sources would likely indicate that Johnny Depp is nowhere near reprising his role of Captain Jack Sparrow in this current landscape, but once things simmer down and both parties move past some of the fallout, we can’t rule out the possibility of a return.

For now, however, Disney fans will have to settle for watching Depp as Captain Jack Sparrow in the Pirates of the Caribbean movies that have already been made and are available on Disney+. As you continue your Halloween celebrations, you can also stream Edward Scissorhands.

Johnny Depp’s lawyer Camille Vasquez sheds some light on why Amber Heard’s case and whether it was a part of the #MeToo Movement. During the defamation trial, the lawyer became a celebrity overnight. Her smart tactics at the court made her go viral all over social media.

Camille was even linked with JD. However, she later denied those rumours and claimed it was sexist for people to assume that. While talking about the #MeToo Movement, we all know the number of cases that have come out. However, it has even been criticised, especially when it comes to Depp‘s case.

Due to the Johnny Depp case, the backlash has come in the form that anyone can be accused even if the evidence isn’t strong. Now, his lawyer, Camille Vasquez, has spoken about whether she thinks the Amber Heard trial was a part of #MeToo and how she felt supporting the Pirates of the Caribbean star amidst the movement.

While speaking with CBS’s The Talk, Camille Vasquez was asked, “Did you ever hesitate as a woman taking on a case with such a high-profile celebrity? Especially in this post-Me Too movement.” To this, Johnny Depp’s lawyer replied, “No because I know Johnny as a person, I’ve worked with him for four years. I believed him. You know, to me, this case was not a Me Too case.”

“This was about what happened between these two people, and in a lot of ways, if you want to look at it as a Me Too case, it was an opportunity for Amber Heard to tell her story, have an investigation happen in a court of law, and a jury came back and said ‘no we don’t believe you’. But I never hesitated because I believed Johnny, I was an advocate for him, and I wanted the opportunity to give him his life back. He deserved that,” she added.
Continue Reading
Advertisement