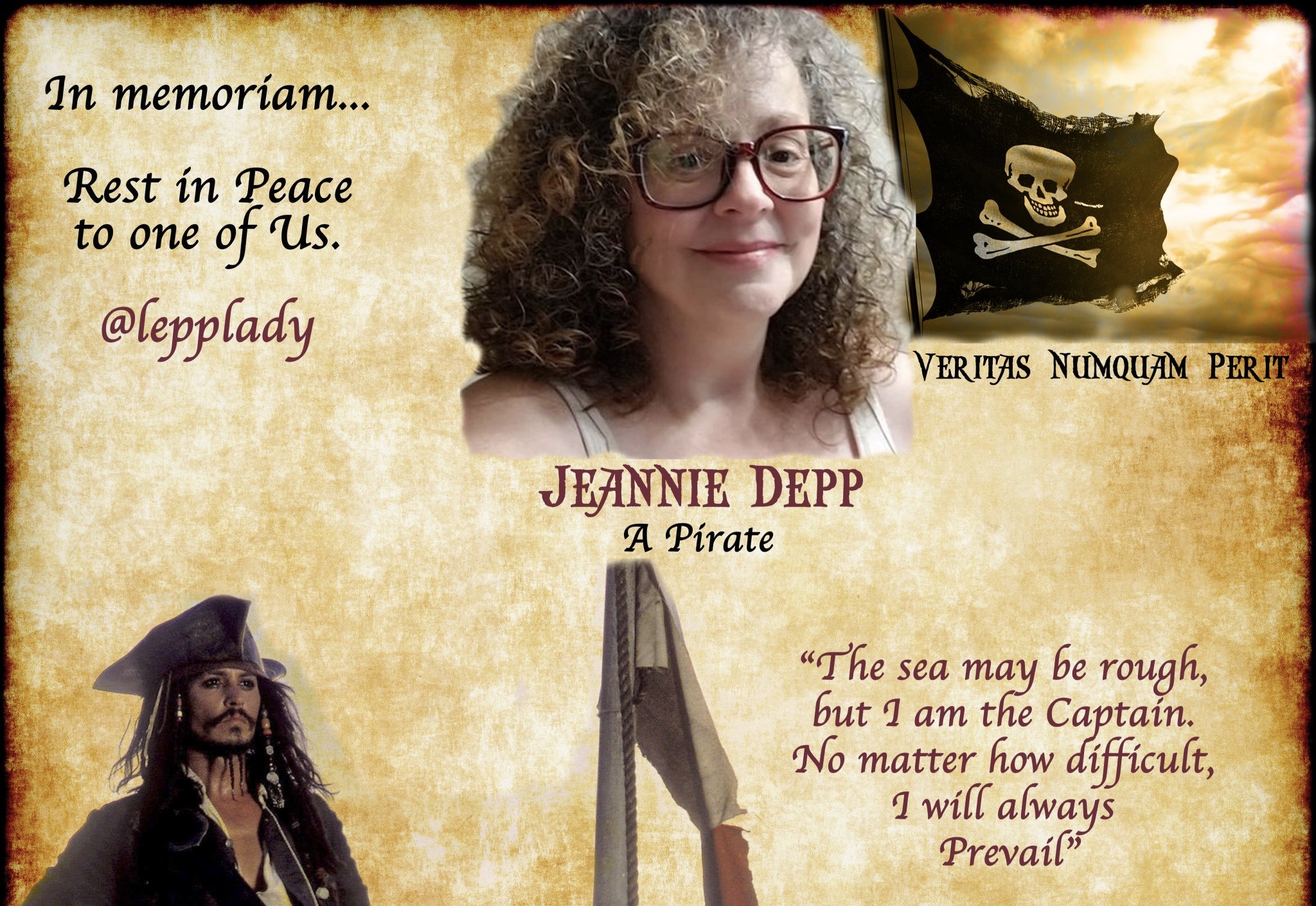 Jeannie Larson, popularly known as Jeannie Depp for being Hollywood actor Johnny Depp’s biggest fan, died suddenly earlier today. Read on to learn how did Jeannie Depp die, what happened to her, and what was the cause of her death.

Jeannie had just celebrated her birthday last week. Other Johnny Depp fans are mourning the loss of the lady who supported the “Pirates of the Carribean” star in his lawsuit against ex-wife Amber Heard.

Who was Jeannie Depp?

Jeannie Depp, real name Jennie Larson, was an author and artist from America. She was best known for being a massive Johnny Depp fan. The extent of her support could be understood by the fact that her online moniker had “Depp” in it.

Jeannie was also a big cat lover who was always seen with the feline creatures. She had a Twitter account with the username @Lepplady where she had 6,000+ followers. She was widely known among other Depp fans.

Coming to her personal life, Jeannie Depp was born as a twin in Virginia. She was a daughter of a Navy man and joined the Army herself after graduating from high school. She went on to marry her husband from the Army but then turned into a writer after her divorce.

How did Jeannie Depp die?

Jeannie Depp died suddenly on Tuesday, December 6, 2022, while visiting Lorain Ohio. She was born on December 3 but the year of her birth is unknown at the time of writing. She was a young lady who wasn’t too old.

The tragic news of Jeannie “Depp” Larson’s death was made public by her son in an emotional post via Facebook. You can take a look at the post below:

The news was further confirmed by her sister Zan Tsagarakos on social media. The tribute is available below:

“Rest in Peace, dear Jeannie; I will always love you and miss you, my dear friend and sister.” Thank you for everything you did for me and all your encouragement, I will treasure your books and will always love your family. Sleep easy, dearest, and be calm in heaven. “I love you, sweet one.”

“My dearest, you did not deserve this at all.” I hope my angel in heaven will find you at the gates and give you some company, as you did a lot down here to defend his good name, and I know he always appreciated that. “Rest in Peace, my Sis.”

Jeannie Depp dead: What was the cause of her death?

The specific cause of the death of Jeannie Depp is unannounced at this time. Her son only revealed that his mother passed away while she was visiting Ohio. However, he didn’t shed more light on the manner and circumstances surrounding her death.

We are trying to reach out to the people close to Jeannie in an attempt to gather more information on her passing. We will update this section when more information is released. Make sure you keep visiting us.

Following the sudden death of Jeannie Depp, fans are paying tribute to the iconic Johnny Depp fan who always supported him through the good and bad.

Jeannie @Lepplady was a warm and wonderful member of the Johnny Depp community. She inspired a movement with the petition that was signed by millions. She never stopped speaking up against injustice.
We are so proud of her & will miss her dearly.
RIP lovely Jeannie. pic.twitter.com/fh2JHpwGcG

It is weird for me to be sad for someone I didn't know. But I was fond of Jeannie Depp (Jeanne Larson).She made me laugh so much while fighting the fight for Johnny Depp and the Truth. She just celebrated her last birthday this week. So because she was one of us,
I Pay Tribute: pic.twitter.com/YJcO5QX286

Despite numerous tributes, a prayer is awaited from the OG, Johhny Depp, himself. We don’t know if the news will ever reach him and if he’ll realize how big a fan of him Jennie was. However, we hope her soul gets the peace she deserves when Johnny finally acknowledges her.

Jeannie Depp is survived by her sons and ex-husband. The funeral arrangements are pending at this time and will be announced soon. Our heartfelt condolences go out to the family.

When Johnny Depp’s Death Was Predicted By A Portal Due To Non-Stop Boozing, Drugs!