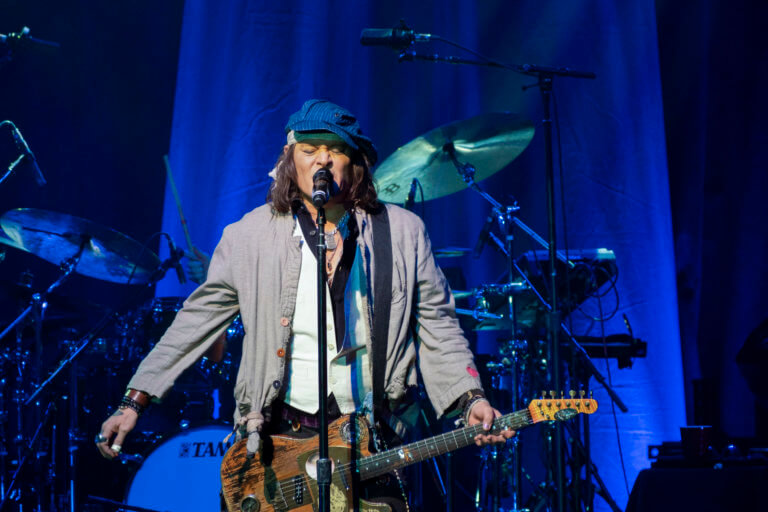 While some may have raised an eyebrow at the prospect of a Jeff Beck and Johnny Depp musical collaboration, it’s safe to say any lingering doubt was erased the moment the guitar legend was joined onstage by the film icon and co-founder of rock supergroup The Hollywood Vampires at The Paramount in Huntington on Oct. 14 and 15. The duo is touring in support of the recently released album 18 following a successful summer run in Europe, culminating in an appearance at the Montreux Jazz Festival. Beck, Johnny Depp Take the Stage at the Paramount

The Oct. 15 gig opened with a set from Desure, a Los Angeles-based singer-songwriter fortuitously discovered by Depp while working at a tattoo parlor. Desure shared the story of strumming songs for the actor/musician/pirate while he got inked—an unwitting audition leading to his stellar, heartfelt performance of several acoustic numbers from his new record “Still Blue” before a raucous Long Island crowd.

The first half of the show was a master class by Beck, with the two-time Rock & Roll Hall of Fame inductee blazing through original classics including “Freeway Jam” and newer covers ranging from Davy Spillane’s “Midnight Walker” to a haunting rendition of Brian Wilson’s “Caroline, No.” Sporting his trademark black vest, white T-shirt and tinted shades, Beck seldom interacted with the crowd, preferring to let his lyrical, intricate guitar licks do most of the talking, and graciously ceding the spotlight multiple times to his bandmates: bassist Rhonda Smith, drummer Anika Nilles, and keyboardist Robert Stevenson. 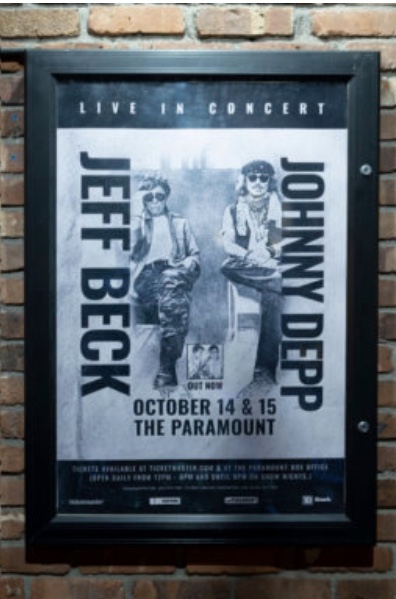 Once Depp strolled onstage, rolled cigarette in hand, during the opening notes of “Rumble”—a Link Wray & His Raymen cover—the packed house rose to its feet, showering the notoriously shy star with applause and squeals of “I love you Johnny!” Donning his trademark fedora, bandana, and well-worn shoes, Depp was decked out in his usual array of eclectic jewels—his hair falling in loose waves to his shoulders as he and Beck playfully traded guitar riffs. A large, mysterious “X” of neon tape on the back of his blazer and similar “P” on the back of his shirt sparked references among the crowd to his classic role as pirate Jack Sparrow in the Pirates of the Caribbean franchise. Dangling from a gold chain at his waist was his infamously “cursed” Aztec gold medallion—a classic token of Captain Jack, and something Depp has been spotted wearing on nearly every stop of the tour.

The guitar duo then kicked off a lengthy set from 18, beginning with the Depp original “This Is a Song for Miss Hedy Lamarr,” during which he showed off his resonant vocals before stepping into the shadows to take in Beck’s masterful solo. This was followed in short order by soaring renditions of John Lennon’s “Isolation” and Dennis Wilson’s “Time,” both performed on a recently gifted, custom-crafted Telecaster-style “Shipwreck” guitar from luthier David Petillo—inspired by the swashbuckling films. He then switched gears to the low growl of The Velvet Underground’s “Venus in Furs,” a number which sent the crowd into more shrieks of ecstasy. Closing out the main set, a stellar instrumental rendition of The Beatles’ “A Day in the Life,” during which Depp removed his sunglasses and lit another cigarette while humbly tipping his hat in gracious appreciation to the enraptured crowd. The encore featured Jeff and his band slaying a cover of “Little Wing” by The Jimi Hendrix Experience, before Depp rejoined for the grand finale, Killing Joke’s “The Death & Resurrection Show,” a clear crowd favorite, given their deafening roars. As the two shared an embrace, the applause rained down from all corners of the venue, along with tokens from fans that included a silk scarf, assorted flowers, and other mementoes.

Outside the theater, the mood remained high, as about 100 fans gathered by a back door hoping for one last glimpse of the stars—a true curtain call to an incredible performance if ever there was one—with many devotees lingering well into the wee hours of the morning to witness the procession of tour buses departing for their next stop.