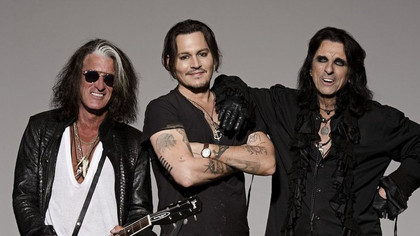 “I think that if he had his druthers, he would rather be a rock star,” the Aerosmith guitarist says.

“I think that if he had his druthers, he would rather be a rock star – not a rock star in the sense of being famous as a rock star, but having that as his gig. I’m not sure if he’s so enamored with the fame.

“He certainly has the drive and the chops to do it. If people know anything about Johnny, he did go to California with his band to try and make it, and he just kind of fell into the acting thing, and discovered he had this incredible talent and really used it.

“I mean, obviously, I know him pretty well, and I know he really respects that talent, and he really gives it all he’s got. But he really is an outsider, as far as that goes. He just found his own path.

“But he’s a musician from the word ‘go.’ I’ve never met any actors through him. I’ve met musicians through him – plenty of them – but no actors. And you know, walking through his place, he’s got a studio in the living room and guitars hanging on the walls. When I met him, we became pretty fast friends.”

As for Mr. Cooper, Perry commented:

“One of the things that’s impressed me the most about Alice, from the early days to now, even when he takes on the Alice Cooper persona, he’s a rocker.

“The music, from the first record on, you didn’t have to have all the theater that he was a pioneer with – there’s a lot of bands that were influenced by him over the years, without a doubt.

“The thing is he also made sure that the music held up. You didn’t have to see the show to like an Alice Cooper record. On its own, it’s the real deal. So, that’s one of the things I admire about him.

“He’s got the ability to perform and write some really heavy rock stuff, and they’re great songs. Some of my favorite songs to play live are ‘I’m Eighteen’ and ‘School’s Out’ – just great riffs.

Related Topics:EntertainmentJoe Perry
Up Next

“Johnny Depp,” Captain Jack Sparrow Is Making A Big Return In Pirates Of The Caribbean 6