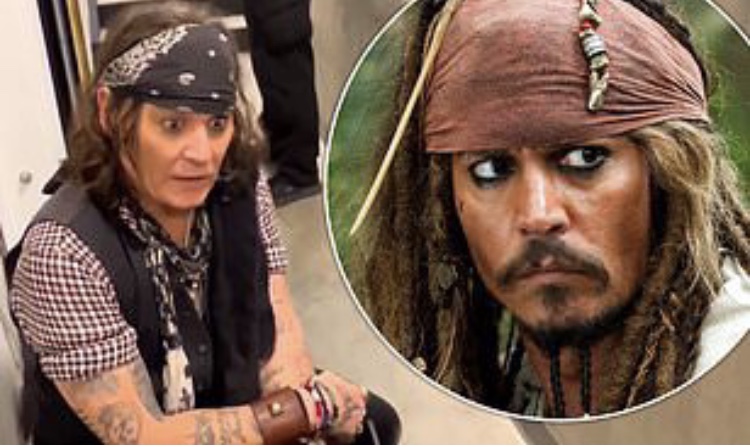 Johnny Depp has delighted one fan by transforming into his most beloved character when meeting with them.

The Pirates of the Caribbean star, 59, was filmed chatting to a fan before effortlessly slipping into the iconic role of Captain Jack Sparrow.
While he begins talking to her as normal in the clip, he soon takes on Jack’s slurred speech patterns and begins talking about rum. 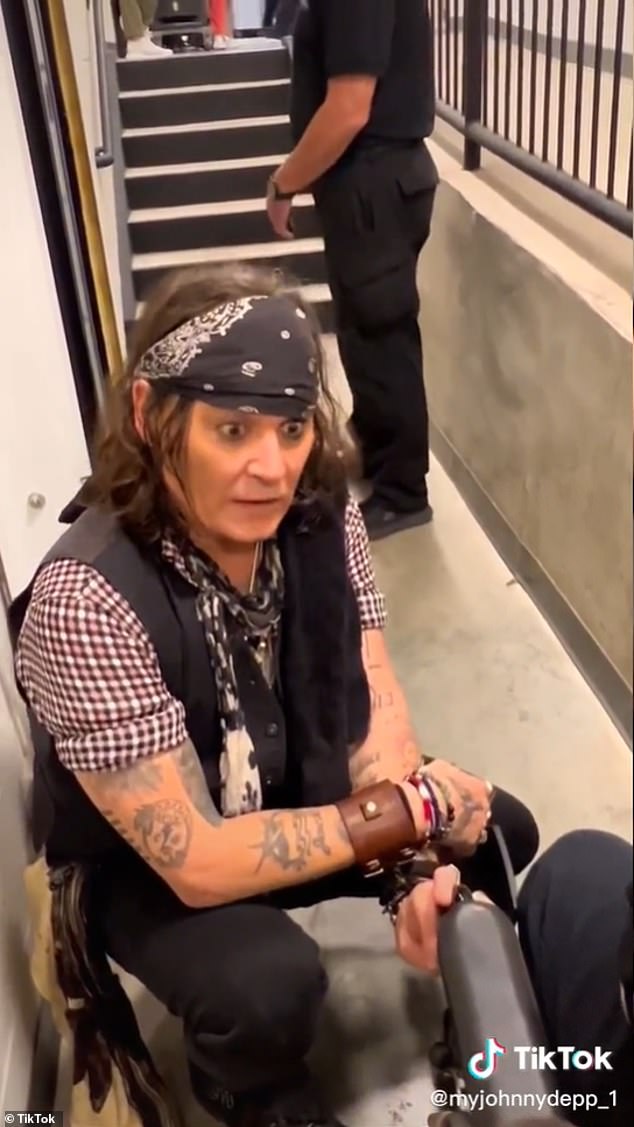 The wholesome interaction was shared on TikTok with fans excitedly praising the actor for his transformation.

But many were taken aback by the star’s clean-shaven appearance, and even dismissed the video as actually being of him.

However, when he launches into his pitch-perfect impression of Jack Sparrow it becomes clear than it can be none other than Johnny himself.

Johnny has been seen putting on the pirate’s famous voice and mannerisms for fans in the past.

He’s previously donned the costume to surprise children in hospital, in character as Jack.

And one time he surprised guests at Disneyland by appearing amongst the waxwork figures on the Pirates of the Caribbean ride.

interested in returning for another pirate film or two. 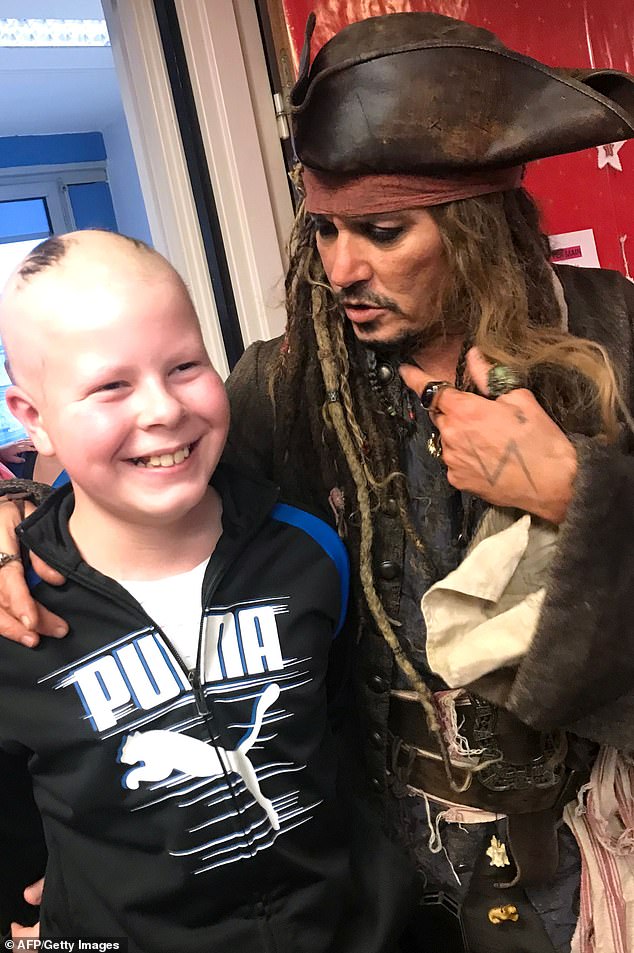 Gracious: He’s previously donned the costume to surprise children in hospital, in character as Jack (pictured at Curie Institute in 2018)

It comes after it was reported that Johnny is set ‘to return’ to Pirates of the Caribbean after being dropped from the franchise in 2018.

He was the major lead in five Pirates movies over the past 15 years and made what was thought to be his final voyage on the Black Pearl in Dead Men Tell No Tales which was released in 2017. 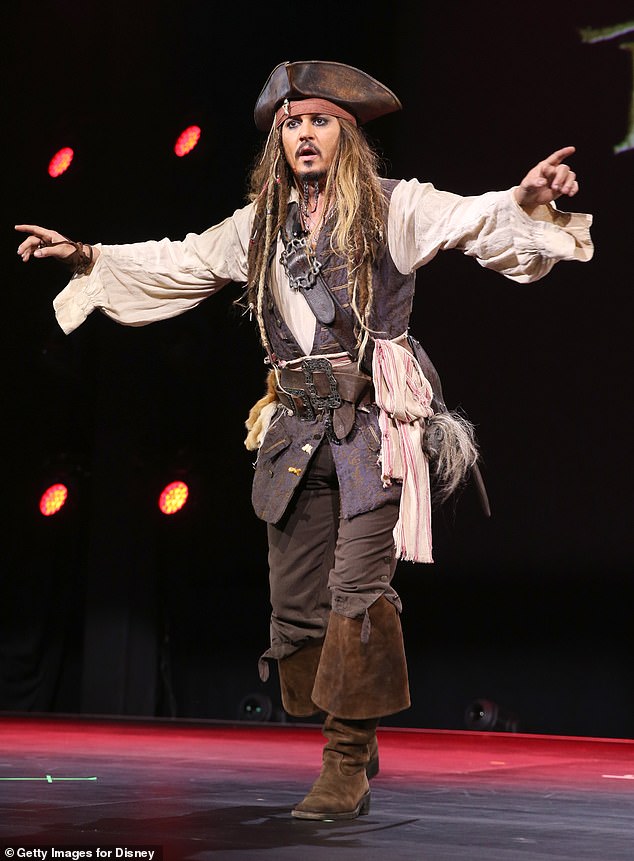 But a source told Poptopic that the actor has been in talks with Disney about a ‘$300 million deal’ after winning his defamation trial again Amber Heard.

The insider revealed that Disney are interested in patching the relationship up with Johnny and have recently reached out to him.

They said: ‘They reached out to the actor prior to his defamation trial against Amber Heard and asked whether he would be interested in returning for another pirate film or two.

The source added that another project is in the works for Disney Plus. They said: ‘The deal is reportedly for Johnny Depp to return as Jack Sparrow in Pirates of the Caribbean 6 and a spin-off Disney Plus series about the early life of the Captain of The Black Pearl.’

They continued: ‘What I can tell you is that the studio has already penned up a draft for a film about Jack Sparrow so they are very hopeful that Johnny will forgive them and return as his iconic character.’

The source said that the media house is working on a ‘$301 million deal’ to coax Depp back soon and are also reportedly adding a ‘sizeable donation’ to a charity of Depp’s choice as a gesture of goodwill.

The Edward Scissorhands star previously told the jury he would not work with Disney again after he was scrubbed from the sixth Pirates movie.

His legal team claims Johnny lost out on a $22 million payday after Amber published her Washington Post op-ed in 2018 that didn’t identify Johnny, but clearly branded him as a domestic abuser.

Johnny said he felt as if he was ‘guilty until proven innocent’ with Disney executives.

Original Pirates script writer Stuart Beattie was the first to publicly confirm that Disney Studios were ditching the star in 2018 as they rework the entire franchise.

Speaking exclusively to DailyMailTV at a red carpet event in Hollywood, Beattie confirmed on camera the reboot means Depp is out as Sparrow.

Nodding when it was suggested Depp was out, he said: ‘I think he’s had a great run. Obviously, he’s made that character his own and it’s become the character he’s most famous for now.