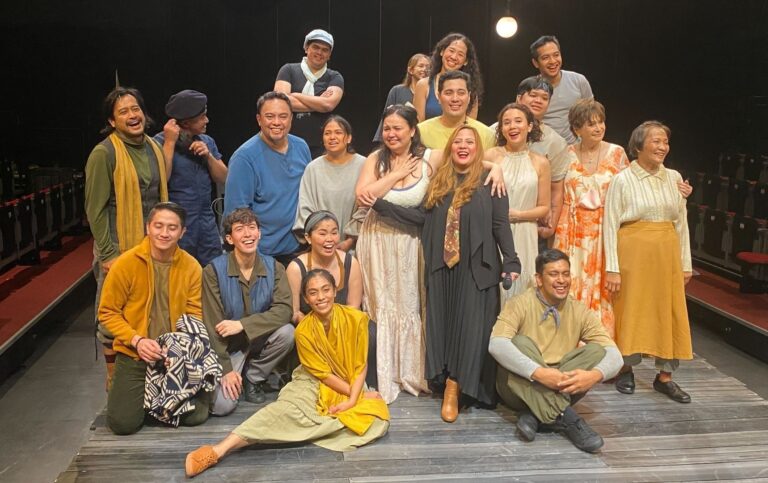 “Carousel” is a musical by Richard Rodgers and Oscar Hammerstein II which follows the tragic romance of carousel barker Billy Bigelow and millworker Julie Jordan, with a subplot of the relationship between Julie’s friend Carrie Pipperidge and her partner Enoch Snow, an ambitious fisherman.

Rep PH tapped Toff de Venecia to direct a new version of “Carousel,” which he envisioned as “post-modern and contemporary.” It was initially going to be staged in May 2020 if not for the COVID-19 pandemic.

Starring in the new production — Rep PH’s 460th live production across 55 years — are Karylle Tatlonghari and Gian Magdangal, also their first projects for Rep PH, as Julie and Billy, while Mikkie Bradshaw-Volante and Lorenz Martinez play Carrie and Enoch.

In a recent talkback session following the gala premiere of “Carousel” at the new Tanhalang Ignacio Gimenez, the show’s assistant director Kyla Rivera explained the show’s contemporary changes, particularly the influence of Depp vs Heard.

“In the original script, you see everybody really come and notice what’s happening… all in the public eye,” shared Kyla. “It’s also commenting on, when you put something out there — your relationship issues — everybody is going to comment on it.”

This particular instance can be seen in “Geraniums in the Winder” scene led by Lorenz’s Enoch, where he asks an audience member to use a phone to document his emotions as the ensemble also pull out their phones to do the same.

Lorenz admitted to having trouble incoporating the phone and relayed such difficulty to Toff when the idea was pitched, “I was like ‘I can’t do this, Toff!’… so  I just committed, sana nagustuhan [ng audience],” he said with a smile.

To understand Toff’s vision for “Carousel,” Karylle said that the director gave them all handouts to study, which amused her husband and Spongecola frontman Yael Yuzon, who graduated from the Ateneo de Manila University with an English Literature degree.

“I personally don’t understand ‘post-modern’… when Yael saw me reading the handouts, he was so proud!” shared Karylle at the same talkback session.

Initially part of their 2020 roster, “Rodgers and Hammerstein’s Carousel” will be Repertory Philippines’ (@RepertoryPH) first live stage performance after the pandemic, under the direction of Toff de Venecia (@toffdevenecia). | via @kjpurneII pic.twitter.com/snk7fs0PJE

The singer compared the experience to being a student again: “You want to be open to new things, to learn and not be insecure about it because I didn’t know half the time what I was reading,” then praising Toff for his collaborative creativity.

Gian added that the cast and crew, having not performed live theater onstage in two years, approached “Carousel” coming from a place of overwhelming gratitude.

“This is the one thing, and I think I speak for everybody on this, we love this… and if you love something, you will really take care of it,” continued Gian. “To share the air together with these people that created [this]… I’m speechless about it, just grateful.”

Noel Rayos, who plays Jigger, mirrored Gian’s view on gratefulness and shared that “Carousel” was the very first play he worked on, and now with Rep PH, he marks his 95th production.

Considered by TIME Magazine as the “best musical of the 20th century,” “Carousel” is famous for the songs “If I Loved You,” “When the Children Are Asleep,” “June Is Bustin’ Out All Over,” “Soliloquy,” and “You’ll Never Walk Alone.”

Repertory Philippines’ “Rodgers and Hammerstein’s Carousel” runs until December 18 in the Tanghalang Ignacio Gimenez Black Box Theater of the Cultural Center of the Philippines.