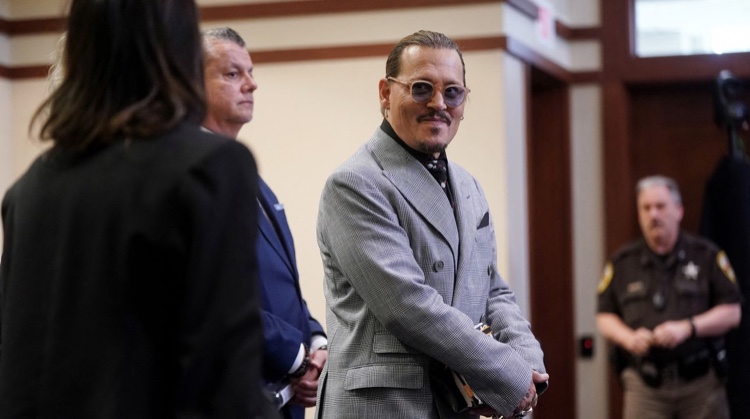 After a week-long break, Johnny Depp and Amber Heard returned to court this week to continue the trial.

The case relates to accusation made publicly by Heard regarding their marriage, in a op-ed in the Washington Post, that led Depp to sue for $50 million in damages and has denied ever being physically violent. Heard is counter-suing for $100 million.

On Thursday, actress Ellen Barkin, who Depp was involved in a casual relationship with during the early 90s, took to the stand as a witness for Heard. She claimed that even then, Depp had an issue with substance abuse and “was drunk all the, most, a lot of the time”.

The court was shown an email which Depp sent to his agent Tracey Jacobs dated 29 August 2015 in which he threatened to sue Chris Hanley’s production company, Muse Productions, unless Amber Heard’s ‘nude scenes’ from the film London Fields were cut.

Depp’s email instructed Jacobs in his email: “NEED YOU to go to the f**king harleys (Hanleys, the film producer) regarding LONDON FIELDS!!! they are going to be PREMIERING IT AT THE LONDON TORONTO FILM FESTIVAL. It is in Amber’s contract there will be NO NUDITY and her f**cking agents are weak and inspid. …will you PLEASE CALL THESE MOTHERF**CKERS and you and Jake get on this IMMEDIATELY!!!???

A second email, written entirely in capital letters, read: “IT MUST BE SHUT DOWN OR I WILL SUE THEM EIGHTEEN WAYS FROM F**KING SUNDAY!!! THEYSE (sic) PEOPLE ARE NOBODYS IN THIS BUSINESS AND THEY SHOULD BE MADE TO UNDERSTAND THAT WE WILL RUIN THEN INSTANTLY!!!!!!!!!!!!!!!!

The nude scenes were apparently shot not with Heard but with a body double.

Video Depositions this morning are much easier to listen too. The witnesses are clear, testifying to what they experienced. Today is going to be very interesting. #JohnnyDeppVsAmberHeard https://t.co/edu56rsP1R

Former talent agent Tracey Jacobs is testifying about Depp and his reputation in the industry. This witness testimony is that Depp’s ‘star had dimmed’ based on his behavior and reputation, including lateness, alcohol & drug use..’people were talking’ she testified.

Tracey Jacobs, one of the leading agents at Beverley Hills-based United Talent Agency, represented Depp from the mid-80s until she was fired by the actor in October 2016. It was claimed at the time that Depp was suffering financial difficulties and was not happy with the commissions which Jacobs was taking so he switched to Creative Artists Agency (CAA) for a better deal.

On Thursday, Jacobs, 62, gave an account of when Depp turned up at her office and demanded that she give him $20million.

“He needed the money. He just expected us to do it. Actually it was I want you to give me $20million. The question was not asked as a loan”. Depp was told that United Talent Agency “was not in a position to give our clients that kind of money. We’re not a bank”.

The trial was due to end yesterday, 19 May but has been extended while more evidence and testimonies are given. The new end date for the trial is Friday 27 May when the final arguments will be heard. This won’t be the end of proceedings, as the jury will still need to give their verdict on whether Heard did defame Depp in her Washington Post article.

Testimony will resume on Monday 23 May.

Will Smith Speaks About ‘Pain’ in New David Letterman Interview

Elon Musk’s “Challenge To This Liar” After Sex Harassment Allegation