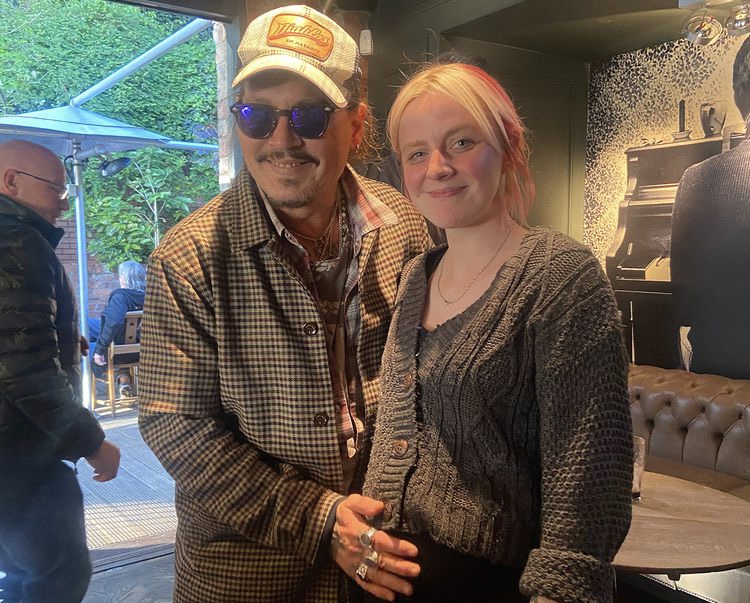 A pregnant manager of a bar in the U.K. is revealing details about a personal conversation she had with Johnny Depp shortly before his win in court.

In an interview with ITV News Tyne Tees, published Thursday, Lauren Whittington recalled Depp, 58, visiting the Bridge Tavern in Newcastle, England, on Wednesday, where she is the general manager.

“None of us could believe it,” Whittington told the outlet, adding that the Pirates of the Caribbean actor “went unnoticed for maybe an hour before anyone realized it was him and Jeff Beck just [sitting] eating fish and chips together in the corner.”

According to Whittington, Depp “noticed I’m pregnant and was asking me how long I have left” during his visit to the pub Wednesday.

“Then he was giving me some advice on [diapers], lack of sleep and the first few weeks of parenthood, saying it’ll be the greatest gift I ever receive and I won’t know love like it until I look into her eyes for the first time,” she said. “He was also talking about his kids, who are grown up now, and how magical being a parent is,” she added.

Whittington told the outlet that Depp “left about an hour before the verdict” was read in court from Fairfax, Virginia. (He won all three defamation claims when it came to Heard’s 2018 op-ed about coming forward with domestic-abuse claims, although she did not mention Depp by name in the article.)

“[He] said he had a Zoom call about [the verdict], so we wished him luck and thanked him for being so kind, and he thanked us for having him,” Whittington said.

Depp was awarded $15 million in damages following the verdict, but Heard will only have to pay $10.35 million due to a Virginia law capping punitive damages (the judge reduced the amount).

The jurors sided with Heard, 36, on one of her three countersuit claims of defamation, awarding her $2 million in damages.

Following the verdict, Depp said in a statement that the “jury gave me my life back,” adding in part, “I hope that my quest to have the truth be told will have helped others, men or women, who have found themselves in my situation, and that those supporting them never give up.”

Meanwhile Heard said in a statement, “The disappointment I feel today is beyond words. I’m heartbroken that the mountain of evidence still was not enough to stand up to the disproportionate power, influence and sway of my ex-husband.”

“I’m even more disappointed with what this verdict means for other women. It is a setback,” she added.

When Johnny Depp’s Death Was Predicted By A Portal Due To Non-Stop Boozing, Drugs!