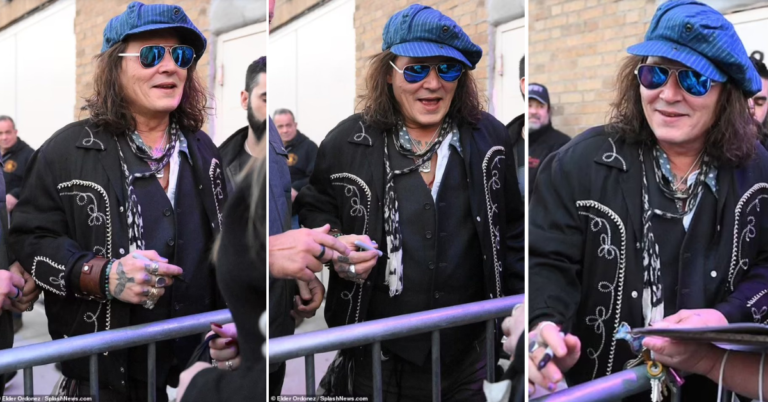 Johnny Depp smiled while signing autographs and taking selfies with fans before a Jeff Beck show in New York. (SplashNews.com)

Johnny Depp stepped out in New York with a fresh, unrecognisable look. The Pirates of the Caribbean actor returned to the states to perform with Jeff Beck on the US leg of the tour after spending the summer playing gigs in Europe. Depp returned to the music scene after the Amber Heard case.

Just after the weeks-long defamation trial ended, the actor flaunted his musical skills by hosting concerts for fans. Later, as a way to revive his career, Depp confirmed going on a tour. Well, so he is. The actor is now in America for the same.

Johnny Depp was seen heading out in New York and debuted a new look after the actor decided to shave off his iconic facial hair, which has been a part of his persona for a long time. The Fantastic Beasts star appeared to be in high spirits while signing autographs and chatting with fans. He wore a white shirt, a black vest, and a grunge-style jacket.

💙"Johnny Depp is in great spirits as he takes selfies with fans outside his second show in New York during US tour with friend Jeff Beck"💙
📷 Ekler Ordonez/SplashNews pic.twitter.com/FBWQ6AKPlF

The Charlie and the Chocolate Factory actor covered his face with blue reflective shades and his head with a newsboy cap. Along with that, Johnny Depp wore rings and necklaces. Several netizens took to Twitter to share their reaction to his new look as well. Many were surprised to see him like this and were left in disbelief that it is really Depp.

Another said, “This is the first man I have seen who aged substantially after shaving.”

“He needs his facial hair back,” a third user said.

“He looks exactly as one would and should after beating his wife & lying to the world, getting them to believe a conspiracy theory instead,” one more user trolled.

While talking about the Hollywood A-lister, although the defamation trial ended, the legal drama with Amber Heard didn’t. After the Aquaman actress appealed the verdict of the Virginia court case, Depp slammed an appeal of his own. The next move is yet to be made, which is why JD is currently focusing on his career.

Meanwhile, Amber Heard has been spending time with her daughter Oonagh and alleged new girlfriend, Bianca Butti, in Spain. Criticism around the same came in after it was pointed out that Amber Heard doesn’t have the money to pay Johnny Depp $10.35 million but can go on a vacation.

Amber Heard Wanted To Get Married To Elon Musk Shortly After Divorce With Johnny Depp But He Refused Her Proposal?

Johnny Depp rocks out with pal Jeff Beck at New York concert . . . while lawyer Camille Vazquez – who represented him against Amber Heard and watched his show – steps out with new man