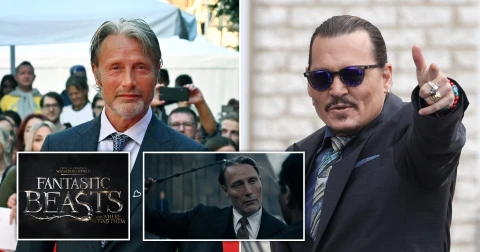 Mads Mikkelsen has suggested that Johnny Depp could make a surprise return to the Fantastic Beasts fold.

The 59-year-old originally played Gellert Grindelwald in the first two outings of the Harry Potter spin-off, before he was replaced in 2022 sequel, The Secrets of Dumbledore over his highly-publicized legal battles, most recently against ex-wife Amber Heard.

Speaking about the decision to portray the fictional character, made famous by author JK Rowling, Mikkelsen admitted that he was ‘intimidated’ to take over the part.

During an appearance at the Sarajevo Film Festival, the 58-year-old reportedly said via Deadline: ’It was very intimidating. Obviously, well, now the course has changed—he won the suit, the court [case]—so let’s see if he comes back. He might.’

Discussing his own portrayal of Grindelwald, the Hannibal star explained that he was forced to go back to the drawing board for the character, as Depp had put ‘so much’ of himself into the part.

‘I’m a big fan of Johnny. I think he’s an amazing actor, I think he did a fantastic job,’ he continued. ‘Having said that, I could not copy it. There’s there was no way I could just copy it, because it’s so much him. It would be creative suicide. 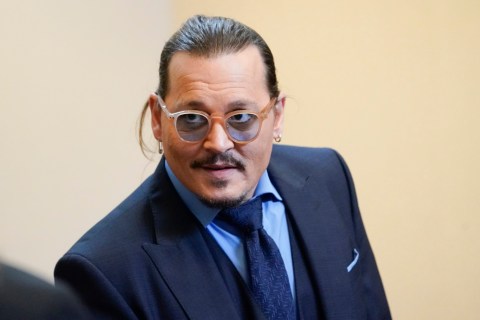 Depp was axed from the Harry Potter spin-off in 2020 (Picture: AP)

Mads was later unveiled as his replacement in the big screen adventure (Picture: Rex)

‘We had to come up with something else, something that was mine, and build a bridge between him and me. So, yes, it was intimidating.

‘His fans were very, very sweet, but they were also very stubborn. I didn’t interact too much with them, but I could understand why they had their hearts broken.’

Depp was asked to step down from the wizarding spin-off franchise in 2020, after he lost a High Court battle against the Sun newspaper, over an article that labelled him a ‘wife beater’.

The Pirates of the Caribbean actor denied all allegations of domestic violence but, following a trial in the UK, Mr Justice Nicol found that 12 of the 14 alleged incidents did occur.

‘I wish to let you know that I have been asked to resign by Warner Bros from my role as Grindelwald in Fantastic Beasts and I have respected and agreed to that request,’ he said in a statement at the time.

‘My resolve remains strong and I intend to prove that the allegations against me are false.

‘My life and career will not be defined by this moment in time. Thank you for reading.’

Earlier this year, he successfully sued Heard for an opinion piece she penned in the Washington Post in 2018, discussing her experience with domestic abuse.

Despite his name not being mentioned in the article, his team argued that it implied he was sexually and physically abusive towards the Aquaman actress throughout the course of their relationship – which he fiercely denied.

A jury eventually found in his favor and awarded him $10million from the $50m he had initially sought, while Heard was given $2m after winning one count of her $100m countersuit claims.

Following the trial, it was confirmed that Depp would be making a return to the big screen, first as King Louis XV in upcoming period drama Jeanne Du Barry.

He will then direct – and co-produce – a biopic on artist Modigliani, with production set to begin next year.