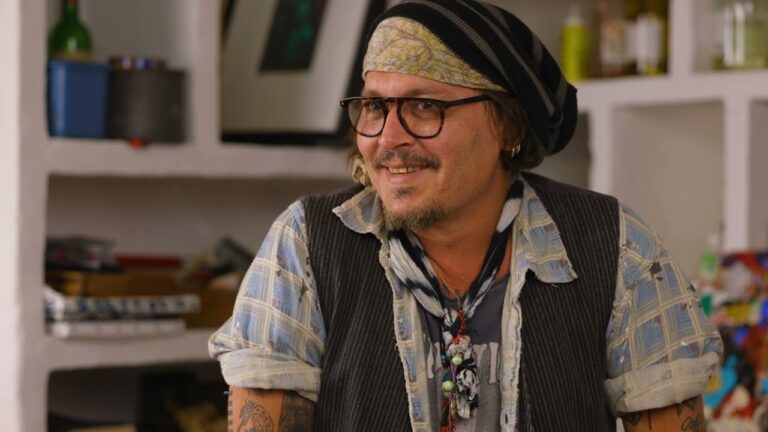 While primarily known to the world at large as an actor, Johnny Depp has never hidden his artistic aspirations in other fields. However, on top of being a musician, the former Pirates of the Caribbean star has also nurtured another passion, which he’s now returned to. Unveiling a campaign he calls Never Fear Truth, Mr. Depp has shifted to the world of art through a special series of portraits.

Naturally, there’s a bit of a double meaning behind this new project that Johnny’s been focused on. Part of this new venture is the sale of NFTs from this exploration into the world of painting; which is probably what helped inspire the branding. However, as he’s made the rounds talking about the debut of this new venture, through Instagram posts and various interviews, Mr. Depp revealed this deeper meaning to the cleverly named series:

For many years I limited myself away from any painting or showing any paintings. Because the idea of making it or succeeding, having success in one field and then using that to instigate some other thing altogether, I was afraid of that. I had far too much respect for art to try and put myself into that world just because people know me as an actor. I didn’t like that, It didn’t sit well with me.

Painting portraits of friends and collaborators like Tim Burton and Hunter S. Thompson, as well as art inspired by his children, Johnny Depp hopes to create an online artistic community. At the same time, he’s intending to support the UK based Great Ormond Street Children’s Hospital, as well as Children’s Hospital Los Angeles, through the sales of these exclusive pieces; which only compliments his patronage of such institutions through costumed appearances as Captain Jack Sparrow. The community part seems to be off to a great start, as there are reports that the official Discord server for Never Fear Truth crashed the entire platform upon opening to the public.

It all circles back to the introductory purpose behind this new collection: Johnny Depp’s fear of displaying his paintings. As noted above, the fame of past roles like Gellert Grindelwald in Fantastic Beasts: The Crimes of Grindelwald was something that he didn’t want to use to boost his artwork’s notoriety. As he’s now got time on his hands at the moment, this new project feels like a potential future career shift for Depp. Continuing to explain the rationale behind Never Fear Truth, this is the statement that seems to signal as much:

So basically after so many years of limiting myself, not allowing myself to show anything that I’ve painted, although I’ve painted for many years and always stuck with it. I think now is a really good time to embrace the fear or whatever and show it. So to kick things off I’ve decided to release a series of NFT portraits of dear friends that matter to me a great deal. They will be released under the title of ‘Never Fear Truth.’

It’s not exactly an announcement of retiring from acting, as Johnny Depp is already lined up for his first movie role since last year’s Miniamata. What this could mean is that we’ll see less of Mr. Depp at the movies, as he forges his path in the art world. If a project as irresistible as that potential reunion with Tim Burton comes along, he’ll probably jump at the chance. For the time being, he seems to be keeping busy with this rekindled excitement about creating painted art.

If you’re one of the many fans that miss Johnny Depp’s work in the Pirates of the Caribbean franchise, you can catch those films among the many other Disney+ movies available on that particular platform. Those looking to the future can follow up on what 2022’s cinematic landscape has to offer can search out the list of upcoming movies ready to sail the seas of your local theater.