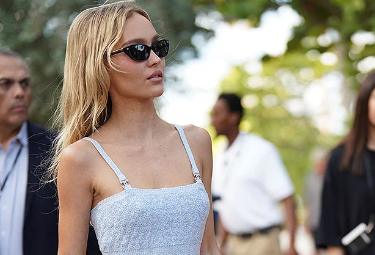 Lily-Rose Depp looked every inch the cover girl daughter of gorgeous parents when she stepped out at the Chanel show in Miami on Friday, Oct. 4. The 23-year-old The Idol actress, whose father is iconic actor Jonny Depp and mother is legendary model Vanessa Paradis, stunned at the star-studded show in a light blue cropped tank top and matching miniskirt. The beauty slipped into a pair of black and white wedged heels and added a Chanel belt and Chanel handbag to the ensemble.

Lily-Rose Depp was spotted at the Chanel show in Miami in Nov. 2022. (Pichichipixx / SplashNews.com)

While Lily-Rose has been making a name for herself as an actress, she first stepped into the spotlight at the age of 16 by becoming the face of the famed Chanel Number 5 fragrance. She’s appeared in numerous campaigns for the French brand over the years as well. Being the muse for the fashion house runs in her blood, as mom Vanessa started her career with Chanel in October 1991, when she starred in a campaign for the Coco Chanel fragrance.

Lily-Rose Depp rocked Chanel at the Chanel show, as she is the face of the fashion house. (Pichichipixx / SplashNews.com)

However, Vanessa first burst onto the scene as a singer in her native France and throughout Europe at the age of 14, scoring a hit with the single “Joe le taxi.” She then went on to become one of the country’s most famous and beloved actresses, before becoming Chanel’s most sought-after model.

Johnny went on to wed actress Amber Heard in 2015, after originally meeting on the set of the 2011 film The Rum Diary. The couple have since split and made headlines recently with their defamation court case, where Johnny was awarded $10 million in compensatory damages and $5 million in punitive damages after he said Amber damaged his career when she wrote an article for The Washington Post claiming she was the victim of domestic abuse. Meanwhile, Vanessa married famous French director Samuel Benchetrit in 2018.

Related Topics:EntertainmentLily-Rose Depp
Up Next

Johnny Depp on Shane MacGowan: ‘There’s another side to my great friend that doesn’t get as much acknowledgement as it should’

Keanu Reeves Reveals He’s Given Up on Playing His Favorite Marvel Hero: ‘It Is Too Late’