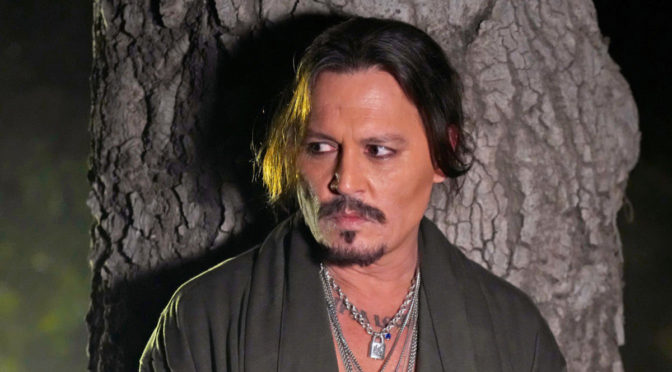 There are several reasons that Johnny Depp is in the news right now, and none of them are due to his acting ability. In truth, few actors have transcended their profession as extravagantly as Depp. While he made his name first as a colossal heartthrob, finding roles within Platoon and Cry-Baby before being launched into fame with Edward Scissorhands, Depp soon turned his attention toward exploring the more artistic side of Hollywood, peppering his CV with art-driven pieces amid box office blockbusters. It’s something that is shaped by his favourite actor.

Depp has received critical and commercial success, earning nominations for ten Golden Globe Awards (winning one) and three Academy Awards. In addition to acting, Depp has also worked as a musician. He has performed in numerous musical groups, including forming the rock super-group Hollywood Vampires along with Alice Cooper and Joe Perry. Depp was initially drawn to music when he was gifted a guitar by his mother at the age of 12 and began playing in various bands. Depp’s wife (at the time), Lori Anne Allison, worked as a makeup artist and introduced him to Nicolas Cage. It was Cage who advised him to become an actor.

Soon enough, Depp would become a global star, reaching parts of the earth with his movies that he likely never dreamed possible. Despite his recent public issues with Amber Heard, the name and face of Depp will live long in the cultural tapestry of society. The same can be said for Depp’s favourite actor of all time too, Marlon Brando. The duo bare some striking similarities, too, not even including their shared credits within 1994’s Don Juan DeMarco.

Once referred to as “the actor of the century”, Brando’s image as Stanley Kowalski in the film adaptation of A Streetcar Named Desirewould set him up for a career like no other. Compounded by his doe-eyed portrayal of Johnny Strabler in The Wild One, something he shares with Depp and Cry Baby, Bando would curate a Hollywood filmography littered with successes. None were as successful as his role as Don Corleone in the empirically outstanding The Godfather by director Francis Ford Coppola.

Brando would work with the famed director just seven years later on Apocalypse Now as Colonel Kurtz. During the shooting, Brando would prove himself to be a unique figure on the acting set, a notoriously private individual; he would engage in strange practices to get his performance just right. Following Brando’s success in Apocalypse Now, the actor forged his own strange path, appearing in few films of note, aside from the infamously bad The Island of Dr. Moreau in 1996, before his early death at the age of 80 in July 2004.

While Brando’s acting chops can never be disputed, it wasn’t simply his performances that led Depp to call Brando his favourite performer during a conversation with IMDB: “Marlon Brando is maybe the greatest actor of the last two centuries. But his mind is much more important than the acting thing. The way that he looks at things, doesn’t judge things, the way that he assesses things. He’s as important as, uh… who’s important today? Jesus, not many people… Stephen Hawking!”

In a previous interview, Depp noted: “There’s only a couple of actors that I can think of that I would be fascinated to find out what their thoughts are — Marlon Brando is one of them. He’s obviously an amazing actor — possibly the greatest — but what fascinates me about Marlon Brando is his brain and his thoughts.” And, again, during a later interview, Depp would note, “I worshipped him [Marlon Brando], and I still do,” before explaining the first time he met his hero.

“Marlon and I met on the phone because I wanted to Don Juan DeMarco with him,” continued Depp. “We spoke for three hours on the telephone, I was in New York, and he was in Los Angeles. I went back the next week, he invited me for dinner; we sat, and we talked, and it was… we connected on many levels, especially the fact that no one wants to be a novelty.”

While we’re not sure if the two men are equally matched in performances, Depp and Brando have shared a remarkable amount of similar roles, grievances and idiosyncrasies. You can see Depp display many of those similarities in the clip below.