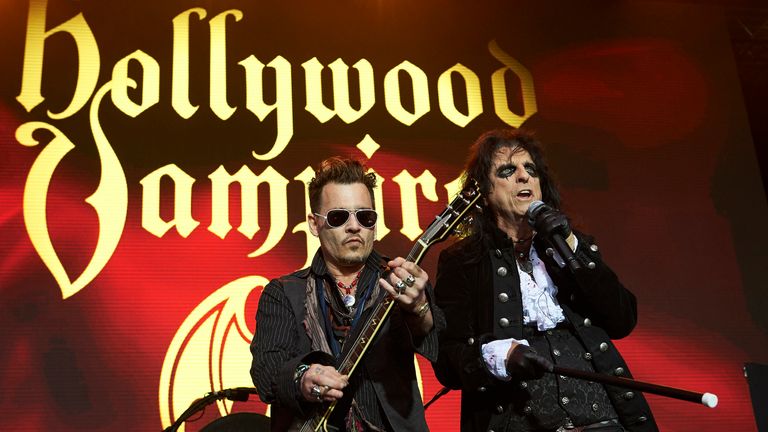 Rock supergroup the Hollywood Vampires – made up of Johnny Depp, Alice Cooper, Aerosmith’s Joe Perry and guitarist Tommy Henriksen – will tour the UK next year, kicking off in Scarborough.

Johnny Depp will tour the UK next year, with his rock supergroup Hollywood Vampires.

The celebrity band – which is made up of Alice Cooper, Aerosmith’s Joe Perry and Depp – will kick off in Scarborough in July 2023. Guitarist Tommy Henriksen will also join the tour.

The group was previously forced to cancel their 2020 tour due to the pandemic.

Depp – who earlier this year won a multimillion-dollar defamation case against his ex-wife Amber Heard – has been throwing himself back into his music of late.

The 59-year-old performed alongside rock legend Jeff Beck at multiple concerts including Sheffield, London, and Gateshead while he was waiting for the verdict of the jury trial to be returned.

The pair later announced a joint album, titled 18, which featured two original tracks alongside a number of classic rock covers.

Depp also made a surprise cameo at the 2022 MTV Video Music Awards – joking with the audience he “needed the work” as he was projected on stage dressed as an astronaut.

The actor had sued Heard over a 2018 article she wrote for The Washington Post about her experiences as a survivor of domestic abuse, which his lawyers said falsely accused him of being an abuser.

Representatives for Depp said he had lost work opportunities and high-profile roles, such as being dropped from the Pirates Of The Caribbean franchise, after the accusations.

Following his trial win, there have been rumours the actor may even return to the Fantastic Beasts franchise.

The Hollywood Vampires traditionally plays songs in tribute to the “great lost heroes of music” as well as some of their own original material.

The band have two albums – their 2015 self-titled debut album and their 2019 release Rise.

Speaking about the new tour, Cooper said: “Well, it’s already been three years since the Vampires have toured because of COVID.

“Also, Johnny has his movies, Joe’s in Aerosmith and I’m in Alice Cooper, so we have to look at that whole thing and see when we can all get a month or two off where we can go out and tour. And, we are going to be doing that, next summer coming up, 2023.

“I can’t wait to get back with the guys, I really love being in that band. My band is great and wonderful, but playing with the Vampires is an entirely different situation.

“I don’t necessarily do any theatrics at all, I’m just the lead singer, in a band, and the band just happens to be one of the best bands around! It’ll be great to see Johnny and Joe and Buck and Chris and all the guys.

“We’ll be rocking these places, especially the UK, I can’t wait to get to the UK! Lock your doors, put garlic all around, because the Vampires are coming!”

Perry added: “Next summer it will be finally time for the Hollywood Vampires to rise again!

“We can’t wait to play the songs from our latest album, Rise, for all our fans across the pond.

“The excitement builds as we count down the days! See you all then… remember, leave the garlic at home!”

The UK tour will kick off in Scarborough on 5 July, with stops in Swansea, Manchester, London and Birmingham before ending in Glasgow on 12 July.

The band are also touring across Europe including Germany, France and Switzerland.

Tickets go on sale on Friday 28 October at 10am.