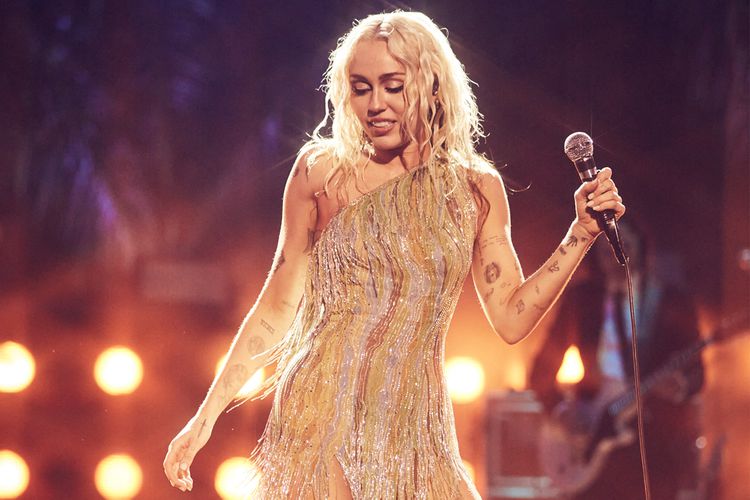 While hosting her second annual Miley’s New Year’s Eve Party alongside godmother Dolly Parton on Saturday evening, it was revealed that the singer, 29, will be releasing a new single, titled “Flowers,” on Jan. 13.

The announcement came when a video showing Cyrus strutting through a street played after a commercial break.

In the clip, the “Prisoner” singer wore a gold mini dress that exposed her stomach, as a snippet of the upcoming tune played.

Back in November, talk about new music from Cyrus began to circulate online after the “Angels Like You” songstress reunited in the studio with music producer Mike WiLL Made-It, with whom she worked on her fourth studio album Bangerz in 2013.

At the time, hip-hop duo Rae Sremmurdshared a series of photographs on Instagram from a studio session, where Cyrus appeared to be making some new music. “EAR DRUMMERS & HEAD BANGERZ!” the post was captioned.

In the photos, Cyrus could be seen singing and holding a microphone, as well as chatting with Mike, 33, and Rae Sremmurd’s Swae Lee and Slim Jxmmi, who are also signed to Mike’s EarDrummers Entertainment imprint.

Mike commented on the post with the emojis for the “I love you” hand sign, an ear, a drum and the globe. According to a screenshot shared by Pop Crave, he also shared the post on his Instagram Story with “2023” — teasing a release date.

Known for her ever-changing musical styles, Cyrus has released dozens of hit singles since first hitting the scene as a teen in the 2000s. Some of her popular tunes include “See You Again,” “The Climb,” “Party in the U.S.A.,” “Wrecking Ball,” “Slide Away” and “Midnight Sky,” among many others.

Cyrus also released numerous songs through characters she has played on television — including “The Best of Both Worlds” and “Nobody’s Perfect” from Hannah Montana, and “On a Roll” and “Right Where I Belong,” which were sung by her Black Mirror character Ashley O.

Related Topics:Miley Cyrus
Up Next

Johnny Depp Once Offered His Nurse To Come See If His “P*nis & Tongue Touch” In An Allegedly Leaked Text That Asked Her To Get Drugs!

Exploring the controversial friendship of Johnny Depp and Paul McCartney