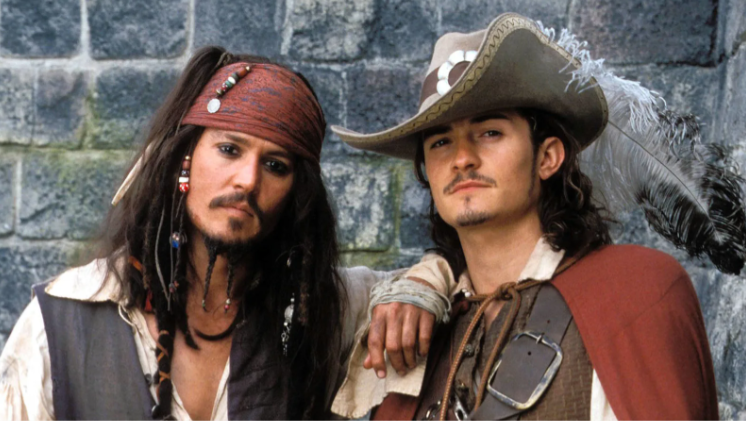 Pirates of the Caribbean is a fantasy genre film that not only takes its viewers on an exciting sea voyage, but also makes an effort to introduce the audiences to the mystics of the ocean and the life of pirates. At the center of this masterpiece franchise is the witty and cunning swashbuckling character of Captain Jack Sparrow (Johnny Depp). Sparrow is portrayed as a character of infinite influence and an expert who indeed steals the limelight in every scene he’s in. Naturally, Jack is arguably the main reason why audiences love this five-part franchise so much. That said, Pirates of the Caribbean also introduces several other lovable and memorable characters like Will Turner (Orlando Bloom), Elizabeth Swann (Keira Knightley), Davy Jones (Bill Nighy), and many more.

Will Turner provided the romantic edge to the overall action and fantasy of Pirates of the Caribbean. And undoubtedly, Lord of the Rings star Orlando Bloom did an impeccable job of portraying the character of blacksmith-turned-swordsman-turned-pirate. However, Jude Law was the first choice for Will Turner. Law’s performance in The Talented Mr. Ripley put him in major contention, however, it was Bloom’s turn as Legolas in Lord of the Rings that won casting directors over. That said, this rejection had a silver lining for Law, who went on to join films like Alfie, Closer, and Repo Men, among many others.

It’s true that Depp is Jack Sparrow, and no one could ever play him the way he does. However, during development of Pirates of the Caribbean: The Curse of the Black Pearl, Matthew McConaughey was one of the big names swirling the role. Per The Things, Disney was initially interested in casting McConaughey due to his resemblance to actor Burt Lancaster, who played the role of Capt. Vallo in the 1952 classic pirate movie The Crimson Pirate.

Richard E. Grant, known for his titular role in 1982’s Withnail and I, was the first casting choice for the character of Davy Jones. However, Grant was not the only name pitched for this role. Actors like Jim Broadbent and Christopher Walken were other contenders for the character. Nonetheless, Bill Nighy ended up playing the gnarly sea monster in the Pirates of the Caribbean movies, which turned out for the best. All worked out for Grant, of course; in terms of Disney franchises, the actor went on to star in Star Wars: The Rise of Skywalker and the Disney+ MCU series Loki (season 1).

Syrena is introduced as a mermaid of unfathomable importance in the plot of the fourth installment, Pirates of the Caribbean: On Stranger Tides. The character, as we know, was ultimately portrayed by Astrid Berges-Frisbey, but before she was cast, Megan Fox was in major contention. Fox, who was riding massively high on the fame of her character Mikaela in the Transformers franchise at the time of casting, made several public statements about her prospective role in the Pirates franchise, essentially expressing her interesting in joining the blockbuster series.

The Office‘s Ricky Gervais could have easily been part of the Pirates of the Caribbean franchise, but funnily enough, he rejected the role, saying to Entertainment Weekly (via TrekMovie), “I didn’t really fancy sitting in a hotel room in Los Angeles for nine weeks for two minutes on screen…I was offered a film in the U.S. starring Johnny Depp, but it was a small character part, and I thought, ‘What’s the point?’”

1/6Heath Ledger as Will Turner

Another prospective name that made headlines for the role of William Turner was that of The Dark Knight actor Heath Ledger. However, during those days, Ledger was still finding his place in the industry and had performed in only few big-ticket projects like 10 Things I Hate About You, The Patriot, and A Knight’s Tale, naturally making him less of a crowd-puller in theaters in the eyes of Disney. Due to such box-office politics, Bloom, who was pretty renowned for Lord of the Rings, was offered the role of Will Turner.

Related Topics:EntertainmentPirates of the Caribbean
Up Next

Served Hot: This Tweet Of Efia Odo Directed At The President Will Blow Your Mind

Johnny Depp didn’t look at Amber Heard even once during trial, his attorney claims actor’s ‘promise’ as the reason