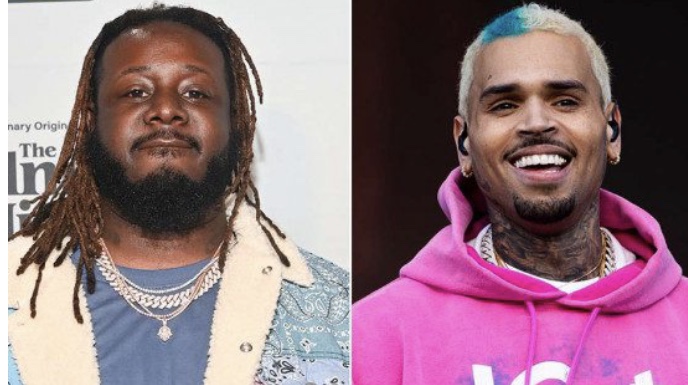 T-Pain is never afraid to speak his mind, even when it comes to his friend Chris Brown.

After Breezy debuted at No. 4 on the Billboard 200 with 72,000 equivalent album units, Chris took to Instagram to call out the lack of support for his 10th studio album.

“SEEMS LIKE YALL ONLY INVEST IN THE NEGATIVE STORIES ABOUT ME,” he wrote in a since-deleted post. “CHRIS GETS IN TROUBLE (THE WHOLE WORLD IS ON IT). Chris drops album [crickets].”

Now T-Pain is weighing in on Chris’ response to the underwhelming sales. When asked by DJ Akademiks about Chris’ “weaker than usual” first-week numbers, T-Pain explained that his “Kiss Kiss” collaborator has been entitled his entire career, a condition he calls the “Princess Complex.”

“That is my motherfu**in’ ni**a, but I know what his faults are,” he said. “The Princess Complex is not only when you get what you want, but you get the accolades of a pretty person for doing absolutely fu**ing nothing, and just being pretty.”

He continued, “The second that the first real motherfu**er comes to you and says, ‘Hey, you ain’t that fu**in’ pretty,’ it’s over. Breakdown, Twitter outrage, everything.”

According to T-Pain, Chris has become accustomed to putting up big numbers, so when he falls short, he deflects on others. “There’s a little princess aspect to it to where it’s like, ‘What the f**k are y’all doing, I’m supposed to be famous. Y’all supposed to be my fans.’”

T-Pain went on to say that Chris should take accountability rather than play the blame game. “It’s never going to be, ‘What the f**k is wrong with me, or what do I need to change, or how can I approach this differently?’”

“Every time he drop, it’s always gone really fu**ing good. Every fu**ing time,” he added. “So now it’s like, y’all must have done something wrong because I’ve done the same thing that I’ve done every time… ‘Cause it ain’t me. I know what I’m doing. I’m fu**in’ Chris Brown.”

Chris has not responded to T-Pain’s comments, but he previously shared a cryptic message with fans, writing, “I’m back on my gangsta shit. It’s BRACKIN at all times.”

T-Pain and Chris have worked together numerous times throughout the years on songs like “Best Love Song,” “Freeze,” and their most recent collaboration, 2020’s “Wake Up Dead.”

Adele One Night Only has been nominated for an Emmy 2022 in the Outstanding Variety Special (Pre-Recorded), but not everyone understands why