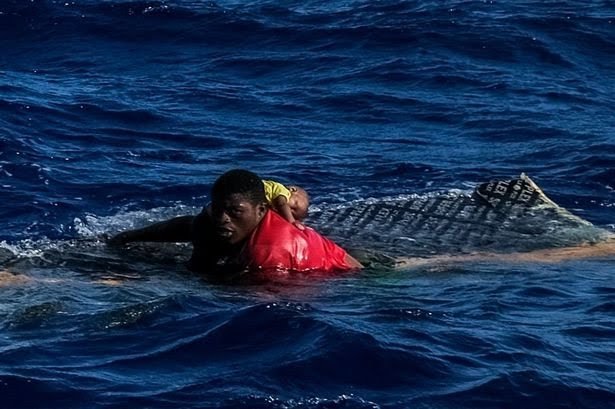 A teenager from Togo has been heralded a hero after a video surfaced showing him holding a four month-old baby above the water during a shipwreck in the Mediterranean Sea last week.

The 17-year-old migrant, who has not been identified publically, saved the baby girl from a tragic wreck in which at least 30 people died.

The distressing footage was captured by a photojournalist aboard the Médecins Sans Frontières (MSF) rescue ship Geo Barents, which arrived at the site of the shipwreck off the coast of Libya.

Published by French media group Brut, the video (in French) shows the teenager holding the infant over his shoulder as he clings to the wreckage of the rubber dinghy, battling to stay afloat in the open ocean.

MSF reports the teenager saying “I am a good swimmer and I went to help people.”

Michael Bunel, the French photojournalist who captured the video, told Brut that when the rescue party arrived they could hear the teenager shouting: “There’s a baby. There’s a baby.”

The crew aboard Geo Barents threw a flotation device to pull the teenager and another survivor in, and gave urgent treatment to the infant, who was not initially breathing but was successfully resuscitated.

Geo Barents rescued a total of 71 people from the shipwreck, some of them with fuel burns. A pregnant woman could not be resuscitated and died on board the rescue ship.

MSF report the ship was not allowed to dock at land for a further five days, before disembarking at the Italian town of Taranto on Saturday (3Jul22).

“What we faced yesterday was our worst nightmare coming true,” said Riccardo Gatti, search and rescue team leader. “The boat was sinking with dozens of people trapped.”

A man from Cameroon who was rescued by the Geo Barants crew reported to MSF that he had been in the sea for 19 hours.

“All these hours, I saw many people drowning. I am happy that I was saved but it comes with a lot of tears,” he says.

The news comes after the EU agency for Fundamental Rights issued a warning last month that humanitarian groups are facing a crackdown by red tape in the Mediterranean. Out of 21 NGO search and rescue boats and planes in the region, only ten are operational amid a suite of legal challenges.

According to MSF, at least 8,500 people died or went missing, and 95,000 were returned to Libya, in attempting crossings of the Mediterranean between 2017 and 2021.