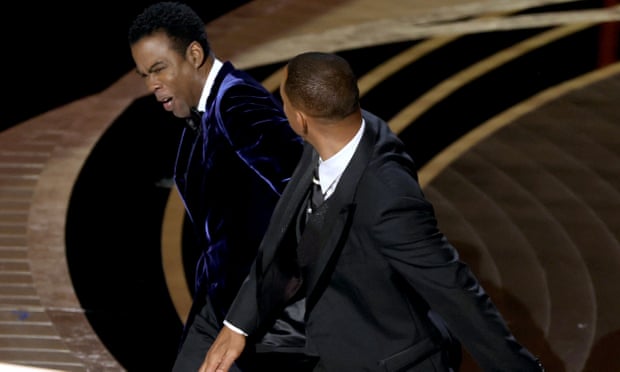 So shocking was Will Smith’s reaction to presenter Chris Rock’s joke about his wife’s hair loss, it is pretty much the only thing anyone can remember about the 94th Academy awards now. That and Smith’s equally surreal acceptance speech for best actor 40 minutes later, in which he cast himself as a protector and tearfully pleaded that “love will make you do crazy things”. Smith might as well have done a Men in Black memory-wipe on the rest of the ceremony.

It was the slap that launched a thousand tweets, memes and overreaching op-eds on the subject of Black masculinity. Celebrity gestures of support and condemnation immediately flooded in, for both team Rock and team Smith. Comedians exhausted every possible joke on the subject (“What does Chris Rock have on his face? Fresh prints”). Then the world moved on, but The Slap continued to echo around Hollywood.

Smith has spent much of the past year either apologising or “working on himself”. A written apology came the day after the Oscars, via Instagram: “I deeply regret that my behaviour has stained what has otherwise been a gorgeous journey for all of us. I am a work in progress.” Smith made a similar video apology to Rock a few months later. In June, Smith’s wife, Jada, the target of the joke, made an appeal for Smith and Rock to reconcile.

Rock did not respond to these various entreaties. “He’s not concerned with the Smiths at the moment,” a source told ET in June, “he’s touring and he’s preparing for a comedy special.” Since April, Rock has been touring the world with his Ego Deathcomedy show, during which he has occasionally mentioned The Slap. In July, in Atlanta, Rock joked, about “getting smacked by Suge Smith” – an allusion to notoriously intimidating rap mogul Suge Knight. In Arizona, he reminded audiences that Smith had once played Muhammad Ali. “He’s bigger than me. The state of Nevada would not sanction a fight between me and Will Smith.” In Liverpool, on stage with Dave Chappelle, he had a direct message for Smith: “Fuck your hostage video” – referring to Smith’s July YouTube postoffering contrition for his attack.

Smith has also been touring the world, filming his new National Geographic series Pole to Pole, and finishing off his latest movie, Emancipation, in which he plays a runaway slave. He is currently doing promotional rounds for the film, which means repeatedly revisiting his unhappy-slappy moment. “That was a horrific night as you can imagine,” he told Trevor Noah recently, claiming to have no recollection of the actual moment. “There’s many nuances and complexities to it. But at the end of the day, I just – I lost it.” He has referred to his childhood in justification: “It was the little boy that watched his father beat up his mother – all of that just bubbled up in that moment.”

One party that has acted decisively is the Academy itself. After issuing its own apology for its handling of the situation, it announced in April that it had banned Smith from the Oscars and all other Academy events for 10 years. It is unlikely they’ll do a ceremony without a raised stage ever again, either. Meanwhile, Emancipation has been getting good reviews, so if it receives any nominations this season, things could get awkward. The Academy also invited Rock to host the 2023 Oscars, he revealed earlier this year. He declined, saying it would be like returning to the scene of the crime.

Howard Stern Calls Out Oprah for Showing Off Her Wealth: ‘It’s F—ing Wild‘ Because ‘There Are People Struggling Out There’