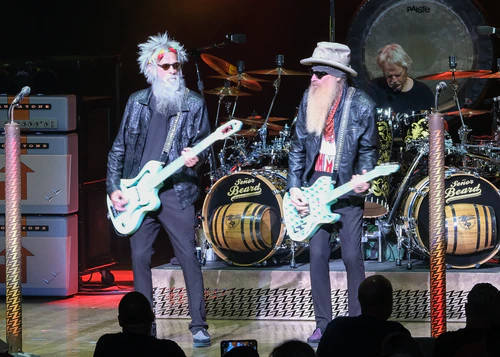 This weekend will go a long way in proving the old guys still got it.

At 75, Elton John plays Progressive Field    Saturday night. It’s Sir Elton’s third time in Cleveland on his farewell tour. But first up on Friday were Willie Nelson and ZZ Top.

The first big draw of the evening was Gov’t Mule. The Georgia jam band’s loyal fanbase put on a strong showing.

The crowd at Blossom ranged from joyful baby boomers and parents with small children to leather-clad Hells Angels members. No matter the age, color or gender, all were air guitaring their way through every song, from the onset of “Traveling Tune” to the driving “Railroad Boy” to the emotional country blues of “Banks of the Deep End.”

Of course, at the center of it all was lead singer/guitarist Warren Haynes. At age 62, Haynes still plays guitar like the charged-up 20-something who worked alongside the likes of David Allan Coe and Dickey Betts.

Haynes’ vocals soared on Gov’t Mule’s “Time to Confess” before he embarked on an epic solo that felt like the musical equivalent of a spiritual awakening. The thrills and chills continued on “Wake Up Dead” and the band’s stellar cover of Tom Waits’ “Make It Rain.” But it was the fan-favorite “Soulshine” that truly brought the house (about two-thirds full) down.

Francis seemed a bit stiff early on, lacking some of the natural charisma and chemistry Gibbons had with Dusty Hill, who passed away last year. But Gibbons had Francis’ back. From the moment the 72-year-old frontman took the stage and blazed through “Under Pressure,” you couldn’t take your eyes off him.

The first third of ZZ Top’s set was thrilling and very (very) loud. “Waitin’ for the Bus” and “Jesus Just Left Chicago” (the opening one-two punch from 1973′s “Tres Hombres”) still pack a wallop. “Gimme All Your Lovin’” inspired the kind of swaying dance moves you see your parents or grandparents pull out at weddings. “Pearl Necklace” and “I’m Bad, I’m Nationwide” provided the call and response singalong fans seemed to be begging Gibbons for.

When Gibbons wasn’t wowing the crowd with his signature growl, he was doing it with playful guitar tricks. “We just making this s*** up as we go along, man,” he quipped. The livelier Gibbons got, the more Francis loosened up, joining his bandmate for some of the signature moves Gibbons and Hill made famous.

Midway through ZZ Top’s set, the front of the pavilion at Blossom Music Center truly began to feel like a roadhouse. It smelled like one too, with a somewhat tolerable mix of sweat, beer and smoke permeating through the air.

No matter. Gibbons and ZZ Top were on fire, backloading the set with another run of hits, including breaking out the signature white fur guitars for “Legs.” ZZ Top delivered an encore capped by a fiery version of “La Grange” that saw the stage lights bounce of Gibbons’ guitar and bubbles (yes, bubbles!) fill the air.

It was a tough act to follow. Then again, Willie Nelson can simply stand on a stage and bring about a standing ovation, which he did when he arrived a few minutes before 10 p.m.

Nelson’s stage setup was modest: Himself and Particle Kid son acoustic guitars with an upright bass, snare drum and harmonica players surrounding them, backed by a massive flag of Texas.

Nelson is 89 years old. Seeing him at this point feels like a rite of passage for any fan of American music. And there Nelson was — still pushing out notes on “Whiskey River” and picking away at his guitar on a cover of Bob Wills and His Texas Playboys’ “Stay a Little Longer.”

Nelson didn’t waste much time with chit-chat, running through song after song with barely a break in between. It allowed him to cram what could have been a lengthy set into a tight hour.

Highlights included Nelson and Particle Kid duetting on “Die When I’m High (Halfway To Heaven),” Mickey Raphael’s harmonica solo on “Bloody Mary Morning” and a singalong to “Mammas Don’t Let Your Babies Grow Up to Be Cowboys.”

Nelson’s set went back and forth between upbeat tunes and ballads. The best example being the transition between “On the Road Again” and “Always on My Mind” — the latter still packs an emotional punch when Nelson sings the chorus.

Many fans seemed to take “Always on My Mind” as a de factor closer, making their way to Blossom Music Center’s exits just halfway through Nelson’s set. Those who stuck around got to witness the icon run through a collection of iconic covers, most notably “Georgia on My Mind,’ Hank Williams’ “Move It on Over” and Terry Fell’s “Truck Drivin’ Man.”

Nelson didn’t deliver an encore. But he didn’t have to. Despite approaching 90 years old, you get the feeling we’ll see Nelson again very soon. Expect the Outlaw Music Festival to return to Blossom at some point and deliver the goods once again.

Note to readers: if you purchase something through one of our affiliate links we may earn a commission.Thank you.