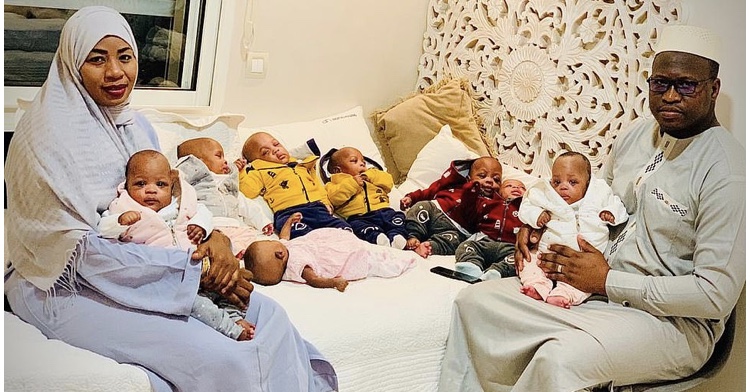 Halima Cisse Has Given Birth To Nine Healthy Babies 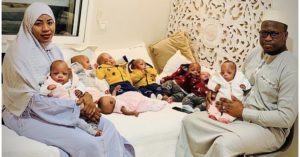 The 2009 word’s record by Octomum Nadya Suleman for giving birth to eight babies at a go has been broken by Halima Cisse, a 26 year-old who recently gave birth to nonuplets on the May 5th at the Ain Borja clinic in Casablanca, Morocco.

The nonuplets which is made of up four boys and girls were born premature. Each weighed between 500gm to 1kg when they were born and had to remain in incubators in the clinic’s intensive care unit for some months.

But now all of them have gained weight and have been growing beautifully. According the mother the babies get more healthier and bigger everyday and this is an indication that they will soon fly back to their homeland Mail.

The father of the babies Mr Kader Arby, who happens to be a serviceman of the Mali navy had jus a single opportunity visit his family due to covid restrictions. 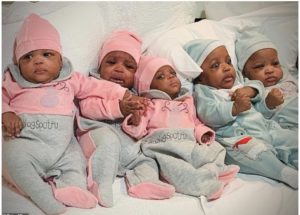 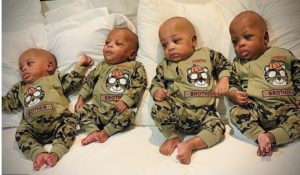 The four boys are called Mohammed, Bah, El Hadji and Oumar while the five girls are named Hawa, Adama, Fatouma, Oumou and Kadidia.

U.S Airstrike Kills The Militant Leader Of The Al-Qaeda.

Patrice Evra Confesses, I Was Sexually Abused By My School Teacher 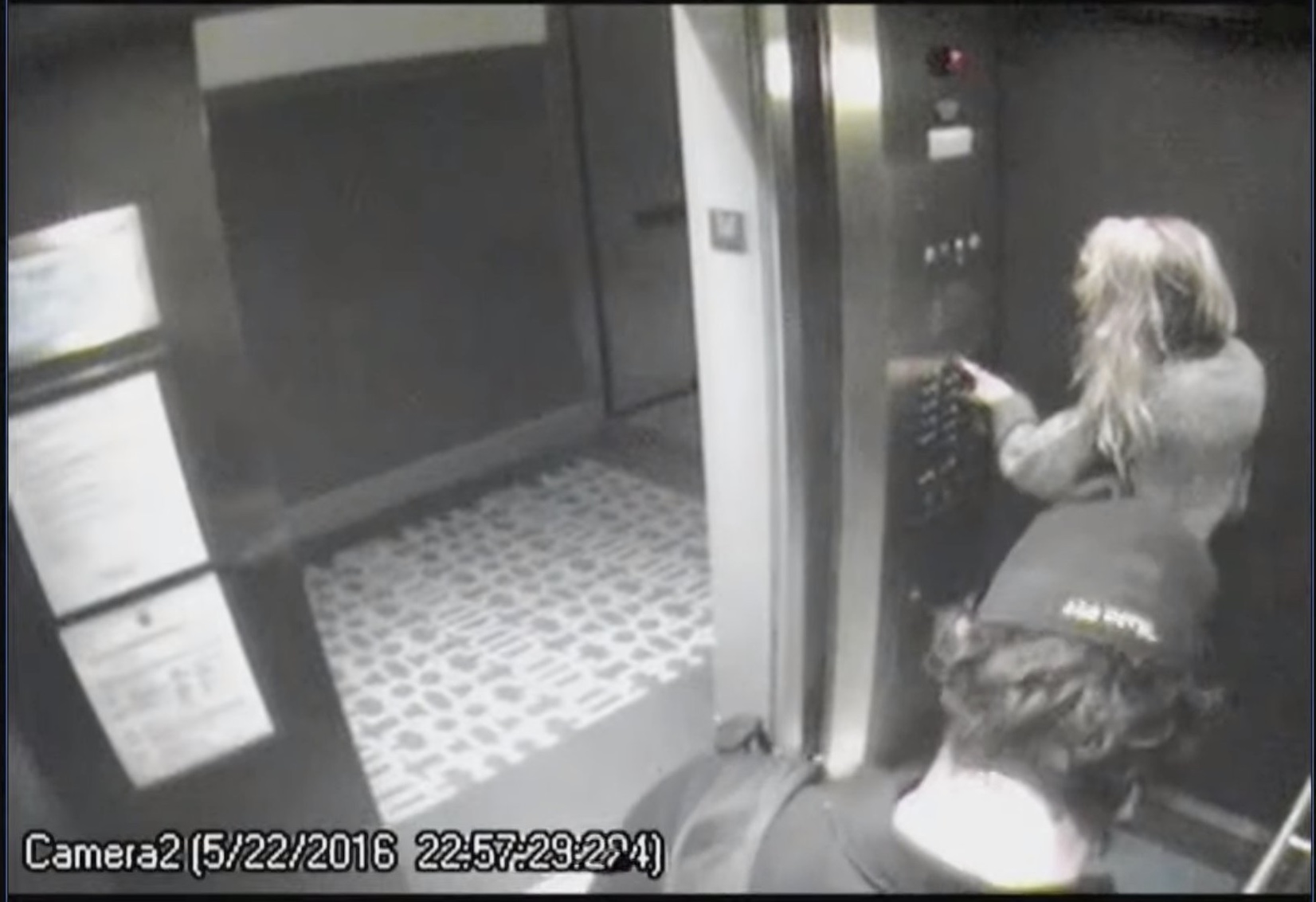 The court is shown CCTV footage of Heard going down in the elevator to meet James Franco and then bringing him up to the penthouse at 10.50pm on 22 May 2016.

Footage has emerged of Hollywood actor James Franco visiting Amber Heard at her apartment the night before she filed for divorce from Johnny Depp.

The surveillance footage was played to jurors in the courthouse in Fairfax, Virginia, on Tuesday morning as Ms Heard endured intense cross-examination from Mr Depp’s legal team during the former couple’s high-stakes defamation trial.

The video shows Mr Franco arriving at Ms Heard’s penthouse apartment at around 10.50pm on the night of 22 May 2016.

Four days later on 27 May, the Aquaman actress then filed for a domestic violence restraining order from her then-husband.

The actress – barefoot and wrapped in a large coat – then exits the elevator.

Heard is asked about having James Franco over to the penthouse at the Eastern Columbia Building on 22 May 2016, the day after she says Depp threw the phone at her and the police came around.

The court is shown CCTV footage of Heard going down in the elevator to meet James Franco and then bringing him up to the penthouse at 10.50pm on 22 May 2016.

CCTV video shown of James Franco getting in the elevator with #AmberHeard the night after the fight at the penthouse when police were called. #JohnnyDepp pic.twitter.com/jBm3GwdbWL

Brief History About Will Smith, Jada Pinkett And Tupac Shakur 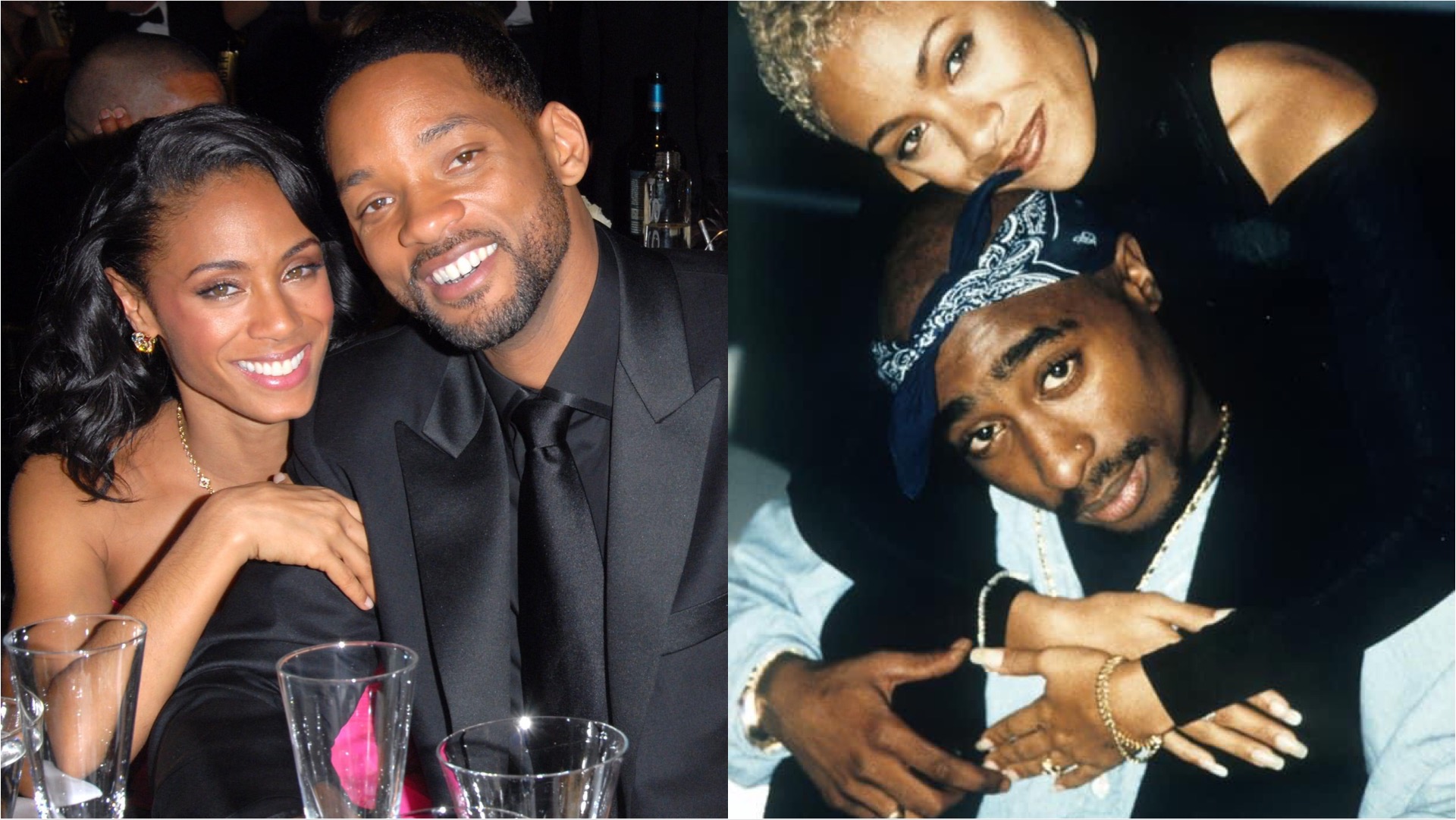 When Shakur was attending the Baltimore School Of Arts in 1986, he befriended Jada Pinkett (now Jada Pinkett Smith).

They became really close and Tupac even wrote poems about her. They became friends for life, Jada described their friendship as an incredible once in a lifetime thing, they were extremely close, they were more than just friends.

Will Smith And Jada Pinkett  met on the set of Fresh Prince Of Bel-Air in 1994, when Jada tried for a role as Will’s on-screen girlfriend. Surprisingly she ended up not getting the role because she was too short. 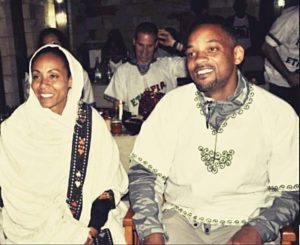 Will Smith and Jada Pinkett in 2005

Shortly after that Will Smith and Jada Pinkett started dating. Will and Pac knew each other to a certain extent. Surprisingly they never talked, because Smith was too jealous of Jada’s love for Shakur so he was never able to open up enough to interact with him.

Smith once opened up about his Jada pinkett’s relationship with the late Tupac Shakur .

“Although Pac and Pinkett were never intimate, their love for each other was legendary- they defined ‘ride or die”. He said.

Add further, he said “In the beginning of our relationship, my mind was tortured by their connection. He was PAC! And I was me.”

Read also : Will Smith And Jada Pinkett Smith Are ‘Committing To Therapy’ After Chris Rock Oscars Drama: ‘Trying To Salvage The Best’

Is Will Smith Devastated After Chris Rock Slap At Oscars? 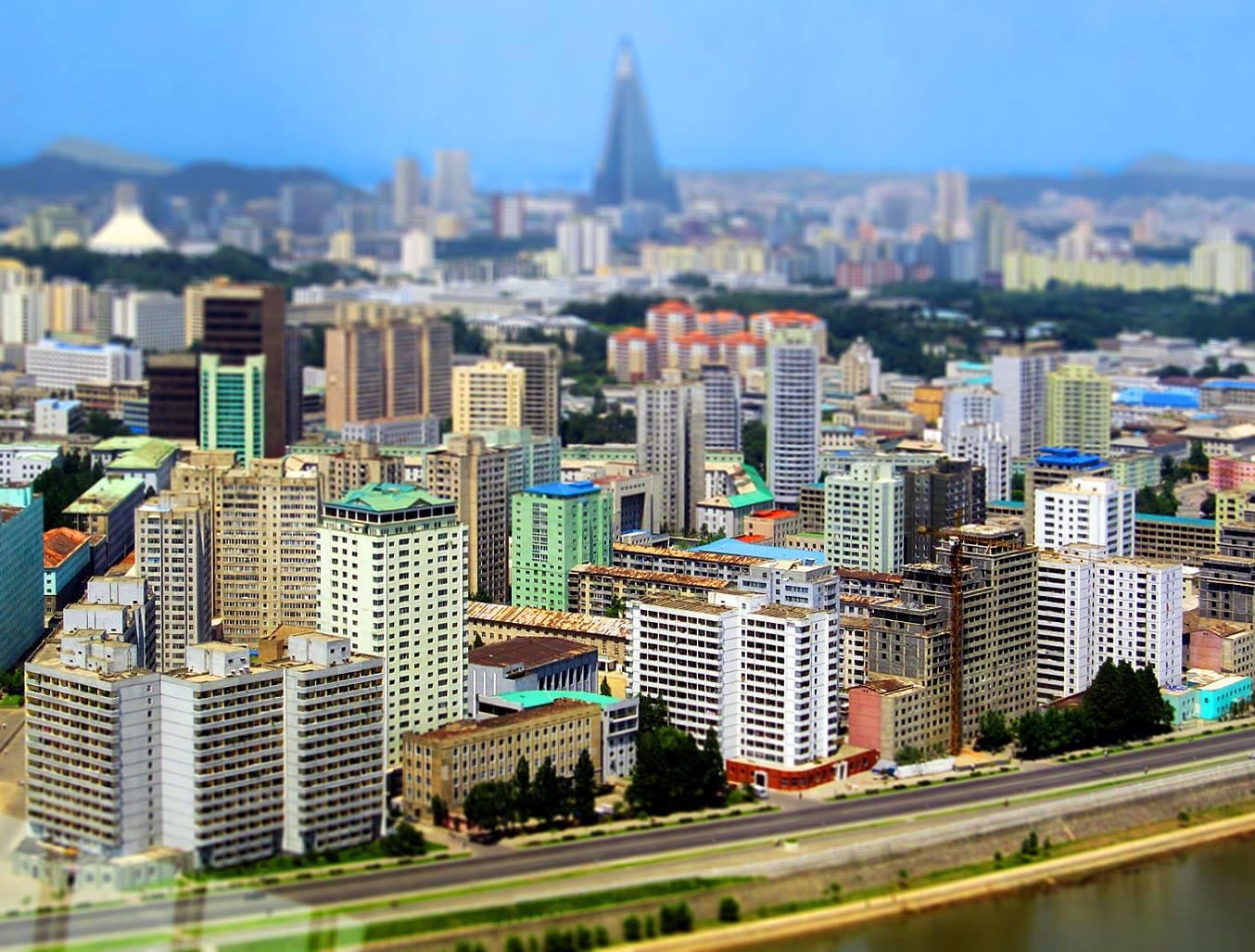 1. Weed Is Legal There
There is no law against the sale or consumption of marijuana in North Korea. “Leaf tobacco” isn’t considered a drug there, and apparently cannabis freely grows by the roadside throughout the country. It’s not uncommon to smell the scent of weed wafting while walking the streets, and it’s particularly popular with young soldiers who prefer it over local cigarettes. 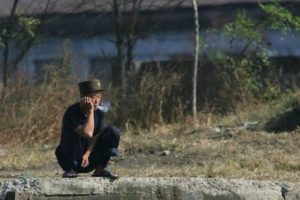 Photo: A Korean youth smoking cannabis by the roadside. 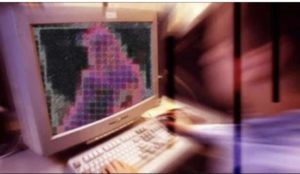 North Korea police tracking down the IP address of a man watching pornography.

3. North Korea Keeps Citizens in Line With a “Three Rule Generations of Punishment”
In North Korea, someone who violates the law isn’t just punished – their entire family is, too. Knowing you’ll be sending grandma to the slammer or your kid to a prison work camp might make you think twice about doing a bad deed. 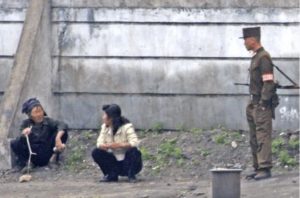 Photo : a law offender being punished with the entire family.

4. They Have Their Own Calendar
The Juche calendar, named after the Juche ideology, is the system of year-numbering used in North Korea. They started the count anew based on former leader Kim Il-sung’s birth date of 15 April 1912, kind of like a Before Kim and After Kim thing. The Juche calendar was adopted in 1997, and 1912 became Juche. 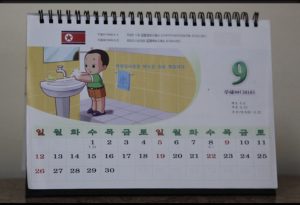 5. North Korea Has Some Serious Military Might
You are probably aware that North Korea has a big army, but you may not know just how big. An estimated 1.19 million people serve are in active military service, making it the fourth largest standing army on the planet. By comparison, the US armed forces has about 1.36 million members. 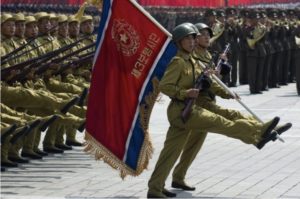 6. Hairstyles Are Restricted
You’re not free to style your hair at whim in North Korea. In 2013 there were 28 state-approved hair styles that citizens could choose from. Married women were ordered to keep their hair sensibly short while single ladies were allowed to wear their locks a little longer. Now they are supposed to emulate the basic bob worn by the Supreme Leader’s wife, Ri Sol-ju. Men used to be able to express themselves through 10 short styles. Now they are forbidden to exceed a maximum of 2cm in length, and are encouraged to copy Kim Jong-un’s ghastly bouffant ‘do (maybe he’s on-trend, see below). Scissor-wielding authorities are cracking down on anyone sporting a “capitalist” hairstyle, and offenders may be shorn on the spot. 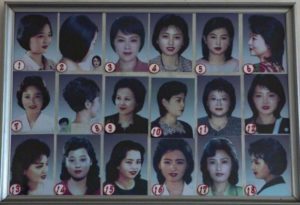 7. North Korea Holds Elections Every 5 Years
Elections in North Korea are held every four-to-five years for the Supreme People’s Assembly (SPA), the country’s national legislature, and every four years for Local People’s Assemblies. Only one candidate appears on each ballot.[7][8] Elections are ostensibly conducted by secret ballot, and a voter may cross off the candidate’s name to vote against them, but must do so by crossing out the name without secrecy.[7] Voting is mandatory and turnout is habitually near 100%. 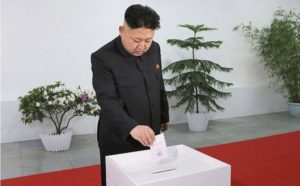 8. A Must-see Attraction in DRNK, at Least for North Koreans
The embalmed and entombed corpses of the late “Supreme Leader” Kim Jong-il and his father before him, “The Great Leader” Kim Il-sung, are preserved and on display in a glass casket for all to see. The mausoleum is located in Kumsusan Palace of the Sun, the former presidential palace in Pyongyang. Apparently 150,000 people line up to see them each day, and there are strict rules about how to dress and bow in their presence. Macabre, yes, but it’s not that strange, really. The bodies of former world leaders Mao Tse-Tung, Ho Chi Minh and Lenin are similarly on display, too. 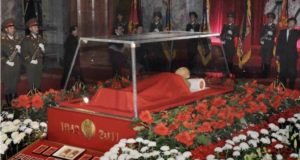 9.0 North Korea Has a 100% Literacy Rate
It’s hard to verify a stat like this, but if it’s true, that puts North Korea way ahead of America’s functional literacy rate 0f 85%. The country does have universal free education, which is a good thing, but the curriculum includes a lot of indoctrination. For example, high school students must complete a three-year 81-hour course on the history of Kim Jong-un, which is in addition to a 160-hour course on Kim Il Sung and 148 hours on Kim Jong Il. Kim worship starts in kindergarten. 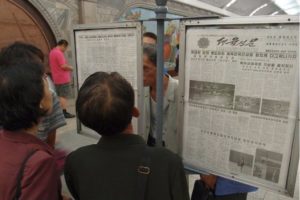 10. North Koreans Are 2 Inches Shorter Than South Koreans
On average, North Korean citizens born after the war are shorter than their South Korean counterparts by about 2 inches. This is attributed to the relative poverty of the northern nation. It is said that 6 million citizens don’t get sufficient food and a third of the children have chronic malnutrition. 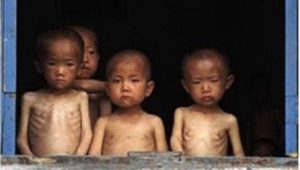